Oklahoma! (Circle in the Square) 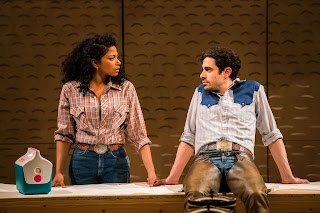 
This high-concept revival of Rodgers and Hammerstein’s first collaboration -- a resounding success when it opened in 1943 running for years -- is very much a mixed bag. The current production premiered at Bard College, and later enjoyed a sold-out run at St. Ann’s Warehouse in Brooklyn.


Here it is now ensconced at a barely recognizable Circle in the Square, lit to maximum wattage with multi-colored mylar strips hanging above. Firearms line the walls presumably to make a contemporary point about gun violence. The playing area, designed by Laura Jellineck, is framed by picnic tables -- outfitted with slow cookers to tease the chili and cornbread that will be served at intermission -- with audience members on the outer benches.The house lights stay on full strength for most of the first act, presumably to offer an immersive experience, though the lady sitting next to me took advantage of the brightness by reading her program from cover to cover with only sporadic regard for the show.


Robert Russell Bennett’s classic original orchestrations have been replaced by Daniel Kluger’s seven-person bluegrass ensemble, creating a not unattractive musical texture. There are 12 principals (no chorus) who sing with as much a country-western flavor as Richard Rodgers’ classic tunes will bear. Terese Wadden’s non-period-specific costumes further underscore the show’s revisionist intent.


Damon Daunno’s Curly’s is an unprepossessing guitar-toting cowpoke always eager to launch into song (much like the Curly of Lynn Rigg’s original play, “Green Grow the Lilacs,” to which Oscar Hammerstein II’s book for the musical very closely adhered). He sings pleasantly, sometime in falsetto, and far from the traditional Broadway baritone sounds of Alfred Drake and Gordon MacRae. Laurey’s rather a sullen gal, and Rebecca Naomi Jones plays her with largely uninflected line readings. The voices in general are nothing to write home about. At times, the performers will grab a mike and start singing in a more presentational way.


The villainous hired hand Jud is embodied with utmost creepiness by Patrick Vaill, and his tense scene with Curly in the smokehouse and, later, his aggressive encounter with Laurey at the box social are played in total darkness with only the characters’ miked voices audible, save for a sporadic live video black and white projection on the back wall. Drew Levy’s sound design adds effectively to the scarily surreal ambiance of these scenes. Elsewhere in the show, Scott Zielinski’s lighting scheme includes some scenes bathed in green light.


Much of director Daniel Fish’s concept --  which it seems to me owes a lot to Ivo van Hove -- is clever. Some of it works, but other aspects fatally betray the source material. In fact, anyone who had a problem with how Bartlett Sher tweaked the ending of his “My Fair Lady” revival would be apoplectic over what’s been done here. Since there surely can’t be anyone on the planet who hasn’t seen the show is some form or other -- be it a high school production or Fred Zinnemann’s superb 1955 film -- it won’t be any kind of spoiler to discuss Jud’s death near the end.


As both Riggs’ and Hammerstein have it, Jud makes a surprise appearance at Laurey and Curly’s wedding, tries to plant an unwanted kiss on Laurey, and when Curly intervenes, Jud pulls a knife. The two men scuffle and Jud falls on the knife.


Here, Jud enters, kisses Laurey, and ritualistically presents Curly with a gift -- a gun -- walks a few paces away, and Curly shoots him without provocation. At that point, Aunt Eller and the townspeople suddenly turn sinister, and contrive to hush up the crime, and the implication is that the couple, now covered in blood, will be culpable for the rest of their lives for this heinous act.


This is a major betrayal of Hammerstein and Rigg’s intent. In both works, it is patently clear that Jud is a vicious killer. It’s implied he already burnt a family to death when the daughter of the house refused his advances. In “GGTL,” Laurey is actually well aware of Jud’s rumored backstory, and fears he’ll do the same to them. In “GGTL,” Jud tries to set fire to a haystack on which the couple have been hoisted as part of a wedding ritual. This scene was reinstated in Zinnemann’s film of the musical. Twice within the show, Jud tries to kill Curly. In both “GGTL” and “Oklahoma!,”  the text plainly states that Jud falls on his knife.


And afterwards, there is no indifference to his death. Everyone is acutely aware of the gravity of the situation. In “GGTL,” Curly is duly arrested to await trial. He breaks out three days later, so he can be with his new bride for at least one night. The authorities allow this, with the proviso that he’ll go back to jail in the morning. But the implication is that, of course, he’ll be acquitted as his part in a struggle was genuinely a case of self-defense. Hammerstein conflated the probable outcome, by having a quickie trial on the spot so the innocent couple could proceed with their honeymoon. Fish is no doubt aiming to make a contemporary sociological point with his staging here, but the text simply doesn’t support it.


The scenes that are played most conventionally, such as the picnic hamper auction where Will, and then Curly and Judy vie for Ado Annie’s and Laurey’s baskets respectively come off best.


I had no reservations whatever about Ali Stoker’s delightful Ado Annie, as good as any I’ve seen. Her being in a wheelchair doesn’t interfere at all with a strong and funny performance. So, too, James Davis’ Will Parker makes a delightfully dim-witted suitor. As Will’s rival, Will Brill is consistently amusing as the Persian peddler Ali Hakim, though he eschews an ethnic accent. The great Mary Testa brings a refreshingly distinctive touch to Aunt Eller’s dialogue, but thought her raucous vocals on this occasion a bit grating. 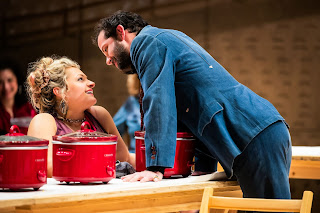 The ballet excepted, most of the staging holds your interest, even when it’s wrong-headed, but I wouldn’t care to sit through it again.


Below: Ali Stroker & Will Brill (c) Little Fang Photo
Print this post
Posted by Harry Forbes at 6:38 AM