The Diva You Do Know (Light Opera of New York) 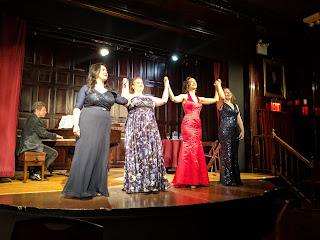 
On this occasion, it must be said that LOONY strayed rather far from its light opera mandate. They gathered four of the best female singers in the operetta genre but set them loose on a wide-ranging program ranging from Wagner to Stephen Schwartz to Joni Mitchell. The fertile fields of operetta were not abandoned altogether, however, as there were some choice morsels from Gilbert & Sullivan, Ivor Novello, and Lehar in the mix. And the end result was emphatically a most enjoyable evening of good music very well sung indeed.


The program, introduced tongue-in-cheek by director Gary Slavin as if pulled together in impromptu fashion, began with its quartet of accomplished ladies -- mezzos Sarah Best and Cáitlín Burke, and sopranos Alexis Cregger and Anne Slovin -- all dressed to the nines as befitting their “diva” status -- joining forces for a very nice arrangement of “I Have a Song to Sing, O” from Gilbert and Sullivan’s “The Yeomen of the Guard.” But this was followed, rather surprisingly, by Cregger delivering a strongly sung “Dich, teure Halle” from “Tannhäuser.” Elsewhere, she gave a melting “Vilja” from "The Merry Widow," also in German, then showed her much lighter side in the second act with a lovely rendition of the old standard  “I’ll Be Seeing You” (Sammy Fain & Irving Kahal) and then a bluesy “Always True to You Darling in My Fashion” from “Kiss Me, Kate.”


That last was followed by Best’s terrific “I Hate Men” from the same show, a souvenir from her performance as Lilli/Kate at Ohio Light Opera in 2016. And it must be said that both numbers were actually more satisfyingly sung than in the current Broadway revival.


Best also offered another souvenir of one of her 2016 OLO roles, the heroine Maria Ziegler from Novello’s “The Dancing Years,” reprising her warmly voiced “I Can Give You the Starlight.” Moving to more contemporary territory, she delivered  a feeling “Meadowlark,” Schwartz’s virtual standard from “The Baker’s Wife.” And her most rib-tickling moment was a tipsy account of George Gershwin and Herbert Stothart’s “Vodka.” 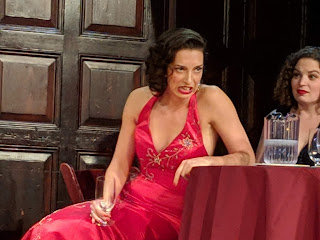 Burke’s opening solo was the hilarious “This Place is Mine” from Maury Yeston’s “Phantom,” the most outright diva-like number on the program, as it’s sung by Carlotta, the egotistical prima donna rival of the show’s heroine. Later, she gave a taste of one of her signature roles, Katisha from “The Mikado,” with a fierce and moving “Alone, and Yet Alive.” In the second act, she unleashed her rich tones on magisterial renditions of Rodgers and Hammerstein’s “Climb Every Mountain” and then “Something Wonderful,” making those familiar chestnuts sound fresh. 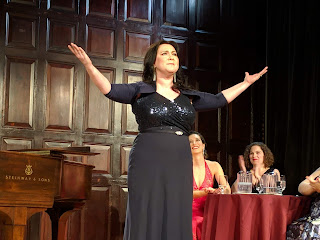 The other G&S selections were familiar but amusingly done. Best and Slovin tried their hands at patter with the Major-General’s song from “Pirates of Penzance,” while Best and Cáitlín made a capital pair of dueling Mad Margarets, alternating lines of “Cheerily Carols the Lark” from “Ruddigore.” Cregger encored Patience’s opening number from her Blue Hill Troupe performance, but this time in tandem with Slovin. 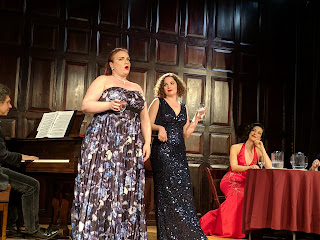 And then there was vivacious Anne Slovin who showed her vocal chops with Norina’s “So anch’io al virtu magica” from “Don Pasquale,” and later demonstrated she could handle Broadway tunes (“Children of the Wind” from “Rags”) and pop (Mitchell’s “Case of You”). She also charmed with the evening’s penultimate solo,  “J’en prendrai un, deux, trois” from Offenbach’s “Pomme d’Api” steering LOONY back to its titular mission.


Seth Weinstein’s antics on the 88’s were a show in themselves, and he provided fleet, stylistically perfect accompaniment.