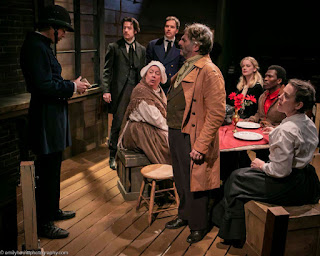 
This wonderfully entertaining revival of 19th century Irish playwright Dion Boucicault’s popular 1857 melodrama about a family brought to ruin by the machinations of an unscrupulous banker is well worth catching.


Adapted from an 1856 French play “Les Pauvres de Paris” by Edouard-Louis-Alexandre Brisbarre and Eugene Nus, Boucicault’s version was a hit from the start when it premiered in New York, and went on to conquer other cities with the titular city duly changed by the savvy playwright whose own life was as colorful as any character he created. “The Poor of Liverpool,” “The Streets of London,” "The Streets of Dublin," and so on proved just as successful.


The play begins with the Panic of 1837, and crafty banker Gideon Bloodgood (Bob Mackasek) is about to abscond with a fortune before his bank declares bankruptcy in the morning. Just then, a sea captain named Fairweather (an impassioned Eric Emil Oleson) enters to make a $100,000 deposit which will protect his beloved wife (Teresa Kelsey), son Paul (Luke Hofmaier) and daughter Lucy (Tess Frazer) should anything happen to him.


But after handing over the money, he gets wind of the impending bankruptcy, and races back, demanding the return of his money. In the heat of the argument, he suffers a fatal heart attack. Bloodgood buys the silence of his chief accountant, the calculating Badger (David Logan Rankin) who’s wise to his employer’s scheme.


Bloodgood’s fortunes are thereby restored, but time passes and we see the captain’s family in desperate straits. Lucy has been courted by the wealthy Mark Livingstone (Benjamin Russell) but he, too, has just lost his money but is too ashamed to let the family know. Bloodgood’s spoiled rotten daughter Alida (Alexandra O’Daly), already carrying on with a disreputable duke, contrives to have her father restore Mark’s fortunes if he’ll marry her, so she can finally gain her much-coveted place in society.


Meanwhile, the Fairweathers’ fortunes decline even more, their only solace being their kindly landlords, the Puffys: a baker, his wife, and son (Jon Lonoff, Jo Vetter, and SJ Hannah respectively).


Boucicault’s dialogue is quite lively and fun and, at times, unabashedly sentimental. Artistic Director Alex Roe, who also designed the production, has beautifully staged the piece without patronizing the material one jot.


The show has been musicalized at least twice in New York. There was the 1963 “The Streets of New York” by Barry Alan Grael and Richard B. Chodosh, and Irish Rep Artistic Director Charlotte Moore did her own musical version in 2001. Here we have some a cappella renditions of period songs which add a very nice touch to the narrative.

The actors are uniformly excellent with everyone astutely cast, and utterly in the spirit. Mackasek makes a fine villain (and shows off his mellifluous singing voice, too). Rankin makes an amusing rogue, albeit ultimately one with a conscience. And O’Daly, outfitted by Sidney Fortner like a puffed up period doll, is the picture of pampered self-centeredness, and she’s very funny indeed. Costumes, setting, and props are all authentically period.


Events spiral in melodramatic fashion culminating in a tenement fire, quite the sensation when the play was first staged (and done remarkably well on a perforce smaller scale here), and there’s a neat bit of staging for the concurrent scenes involving the Fairweather and Badger who share adjoining living quarters. Roe utilizes an ever-spinning turntable to show us what’s going on in one flat, and then the other.


Melodramatic as the proceedings are, there’s a good deal of honest sentiment here and certainly the depiction of poverty resonates with much of what we see today on our streets. Goodness ultimately rules the day which even in today's cynical times can still warm the heart.