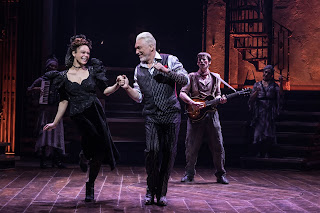 
Here’s a brilliantly creative retelling of the Orpheus and Eurydice myth with music, lyric and book by singer-songwriter Anaïs Mitchell who puts her own stamp on a story memorably musicalized by everyone from Gluck to Offenbach. The work started at the New York Theatre Workshop in 2016, premiered in Canada in 2017, and enjoyed an acclaimed run at London’s National Theatre last fall.


The highly stylized format of the piece rather muddies the narrative at first, but by the end of the first act, there’s more clarity, and the second act is quite sharply focused.


So we have naively innocent Orpheus (Reeve Carney), toiling in a menial restaurant job but possessed of a beautiful voice, and forever obsessing about finishing a song which will help the world. He falls for Eurydice (Eva Noblezada), a runaway girl desperate for food and shelter. They marry, but she finds him so absorbed in his composition and neglectful of his responsibilities that she willingly gives in to Hades (Patrick Page), ruler of an underworld where everyone toils in a factory, signing her life away to join him down below.


Persephone (Amber Gray), Goddess of the Seasons (who alternates every six months between the worlds above and below), is Hades’ neglected wife who intercedes for Orpheus when, advised by Hermes to take the “back road to Hell,” he braves crossing the River Styx to bring her back. Providing witty and melodic commentary as they steer everyone's destiny are the gorgeously harmonizing Fates (Jewelle Blackman, Yvette Gonzalez-Nacer, and Kay Trinidad). And there are as well a chorus of five, workers in Hades’ underworld factory.


All of this is knowingly narrated by Hermes, messenger to the Gods, in the person of the great Andre De Shields, who gets the evening off to a rousing start with the catchy “Road to Hell.”


The score is a deft combination of jazz, gospel, folk, and blues. As has been widely noted, there’s an amazingly prescient song called “Why We Build the Wall,” in which the lyric speaks of "keeping out the enemy," which was actually written long before the Trump era for Mitchell’s original concept album from which the show evolved. There are many other musical highlights ranging from the infectious “Livin’ It Up on Top,” to the sweet duet for Eurydice and Orpheus “All I’ve Ever Known."


The cast is outstanding. Carney’s high-flying falsetto suggests the ethereal beauty of his character. Noblezada, last seen here as the heroine of “Miss Saigon,” is full of spunk as a very streetwise Eurydice and sings beautifully. Gray is simply a knockout as a funky, sexy goddess, and brings down the house with her sassy second act opener, “Our Lady of the Underground.” Page has one of the best roles of his career, with his deeply resonant voice suggesting depths as bottomless as the underworld. There’s surprising depth to the relationship between Hades and Persephone which ultimately takes on a gravitas that matches, or even surpasses, that of Orpheus and Eurydice.


Rachel Chavkin’s direction is as imaginative as her work for “Natasha, Pierre & The Great Comet of 1812.” Stunningly fluid -- and David Neumann’s fine choreography contributes mightily in that respect -- the staging continually surprises and delights with bold strokes and deft small touches like the symbolic use of a red flower. The familiar circumstance of Orpheus being allowed to take his wife back provided he doesn’t look back is given an intelligent and fresh spin here, and Chavkin’s staging of that sequence is surprisingly suspenseful.


What begins as a breezy riff on a timeless tale has been fashioned into a very moving story about the nature of myth and humanity.