Ain’t Too Proud: The Life and Times of The Temptations (Imperial Theatre) 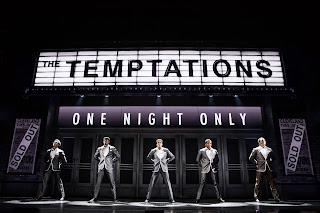 
This latest entry in the jukebox bio musical sweepstakes is most assuredly one of the best. Helmed by director Des McAnuff with choreography by Sergio Trujillo -- two of the creative forces behind “Jersey Boys” -- “Ain’t Too Proud” emerges as very much more in the tradition of that Four Seasons hit, trumping such recent entries as “Summer: The Donna Summer Musical,” “The Cher Show” and “On Your Feet” by a mile, some individual excellences in those notwithstanding.


There is, of course, some overlap with 2015’s “Motown: The Musical,” but “Ain’t Too Proud” has a more focused narrative.
The show had its world premiere run at Berkeley Repertory Theatre, and went on to play sold-out runs at the John F. Kennedy Center for the Performing Arts’ Eisenhower Theater, and the Center Theatre Group/Ahmanson Theatre.
With a strong book by Detroit playwright Dominique Morisseau which holds your interest even as the five-man makeup of famed Motown singing group sometimes seems like a revolving door (there were 24 in all), and featuring a fine cast, including the actors playing the “classic” members: excellent James Harkness (as Paul Williams), wonderfully resonant bass Jawan M. Jackson (Melvin Franklin), high-flying tenor Jeremy Pope (straight from his starring role in “Choir Boy” as Eddie Kendricks), charismatic Ephraim Sykes (as lead singer David Ruffin), and tireless Derrick Baskin (as leader Otis Williams who narrates their story).


Morisseau astutely keeps these central figures in the narrative even after they move on. Ruffin, for instance, brought his distinctive sound to the group, but drug problems, unreliability and violent behavior including abuse of singer-girlfriend Tammi Terrell (Nasia Thomas) led to a split. Still, he remains in the story long after, including his aggressively taking the stage for an impromptu duet with his startled replacement Dennis Edwards (Saint Aubyn). When illness and death take their toll on the group, it’s movingly handled. Morisseau’s script was based on Williams’ book (written with Patricia Romanowki), though as such, I’m not sure how objective the narrative actually is, but she is careful not to paint an entirely rosy picture for Otis.


So it is that we learn of his absence at home from his wife (Rashida Scott) and son (Shawn Bowers), and his sometimes fractious leadership of the group, but generally his actions are described in a sympathetic light, as in “It hurt me to let Ruffin go,” and so on. So, too, the group’s issues with drugs and alcohol are portrayed unflinchingly.


Good as Baskin is, the nonstop narration does grow a bit tiresome, but at the end of the day, it’s the music that matters. And The Temptations’ golden hits are authentically and enjoyably performed. The cast really has the group’s trademark moves down pat. There are over 30 songs listed in the Playbill, including “The Way You Do the Things You Do,” “My Girl,” “Cloud Nine,” “Just My Imagination,” “Get Ready,” and “I Wish It Would Rain.” Many of these numbers are frustratingly fragmented but they sound mighty fine under Kenny Seymour’s music direction. He also did the arrangements with Harold Wheeler’s orchestrations. Harkness has a particularly poignant vocal moment with “For Once in My Life” (actually a Stevie Wonder hit for Motown).


The story begins with Williams’ troubled childhood (including six months in juvenile detention), and the early Detroit days of the group when they were called The Elgins, their signing on with Motown, and moves through the Civil Rights era and beyond.


The expected Motown characters are here too: the Supremes (Candice Marie Woods as Diana Ross, with Nasia Thomas as Florence Ballard and Taylor Symone Jackson as Mary Wilson), Smokey Robinson (Christian Thompson) who wrote many of their hits and guided the group’s efforts, along with Norman Whitfield (Jarvis B. Manning, Jr.) who clashes with Edwards during the recording session of “Papa Was a Rollin’ Stone.” And there’s Berry Gordy (Jahi Kearse) who’s resolutely determined the group will always appeal to white audiences, a stance that causes friction when the group wants to take on more political material.