All My Sons (Roundabout Theatre Company) 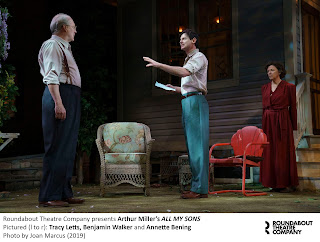 
Director Jack O’Brien has delivered a quite superb revival of Arthur Miller’s oft-revived early piece (pre-”Death of a Salesman”) which grips from the start right up to its devastating climax.


The film with Edward G. Robinson and Burt Lancaster used to be a TV staple, but no longer. Still, it’s been revived with great frequency, including a new production running in London right now with Sally Field and Bill Pullman. I fondly recall a 1982 London production with Colin Blakely and Rosemary Harris. The last Broadway revival in 2009 starred John Lithgow and Dianne Wiest, and in 1987, there was Richard Kiley and Joyce Ebert. while Roundabout itself has done it twice before (in 1997 and 1974).


This is the story of Joe Keller (Tracy Letts), a midwestern factory owner just after the Second World War. His pilot son Larry has gone missing three years earlier and is presumed dead, but Joe’s wife Kate (Annette Bening) refuses to accept that fact. Their surviving veteran son Chris (Benjamin Walker) -- in line to inherit his dad’s business -- has invited Larry’s fiance Ann (vivacious Francesca Carpanini), whom he has known since childhood, to visit so he can propose to her. They realize Kate must be told the news delicately, as their union would be an admission that Larry is not returning.


We learn that Joe had manufactured cracked cylinder heads, resulting in 21 fatalities. There was a trial but Joe pinned the blame on his business partner, Herb Deever, Ann’s father. When Ann’s brother George (Hampton Fluker) visits their father, from whom he and Ann have been estranged, in jail, he learns the truth, tells Ann he’s coming to visit, setting the stage for a major confrontation.


Performances are very fine across the board, including those of Michael Hayden (who memorably played Chris in Roundabout’s last revival) as next-door neighbor Jim; Chinasa Ogbuagu as Jim’s wife; Nehal Joshi and Jenni Barber as their other next-door neighbors, the Lubeys. Frank Lubey is working on a horoscope that may prove to the ever-hopeful Kate that her son has somehow survived the war.


Letts, alive to every nuance of his conflicted character, superbly conveys the forced jocularity and normalcy at odds with the guilt, and Bening, haggard and her voice drained of emotion, shows the steely grit beneath the vulnerability. Walker is particularly outstanding as the idealistic son who simply cannot accept that his father could have done anything wrong.


The color-blind casting of Fluker and Ogbuagu is, to be honest, a bit jarring at first in such a hyper-realistic period setting, but their performances are excellent. And it’s a bit of irony that original director Gregory Mosher dropped out after a dispute about his color-conscious idea of casting the Deevers as black. Rebecca Miller, the playwright’s daughter, had objected to the resulting perception of an interracial romance between Ann and Chris which would not have been casually accepted in those less enlightened times.


Those matters aside, Fluker gives a fine performance of a tricky role, conveying very well how his character’s anger melts under Kate’s calculated warmth before eventually rebounding.


Douglas W. Schmidt’s beautifully traditional set -- the backyard of the Keller home, highly detailed, and lushly green -- Jane Greenwood’s 1940s costumes, Natasha Katz’s lighting, and John Gromada’s sound design all contribute to the classy production design. There’s an effective use of projections throughout, as when the play opens, and a storm rages outside the Keller home.


In a production as fine as this, one can admire anew the rock solid construction of Miller’s play -- and its ongoing relevance -- which no matter how often it’s done, holds the audience in thrall.