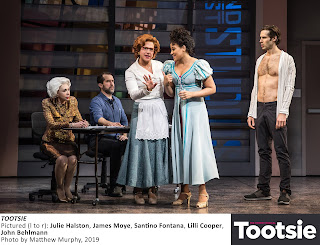 
The positive out-of-town buzz on this musical version of the 1982 Dustin Hoffman film turns out to be entirely justified. Tuneful and very, very funny, the show also features a star-making performance by Santino Fontana as Michael Dorsey who, when he can’t seem to land (or keep) a job as a man, decides to impersonate a woman (under the name Dorothy Michaels).


The film’s setting has been cleverly revamped from a soap opera to a Broadway musical, and some outmoded thinking on feminist issues has been dutifully revised for present-day #MeToo sensibilities, though in fairness, director Sydney Pollack’s film was careful to walk a politically correct road in its day, and still holds up well on its own terms.


Arrogant, always questioning Michael Dorsey has alienated preening director Ron Carlisle (very funny Reg Rogers) by tiresomely wanting to know his character’s backstory and motivation, and gets duly bounced. But when his ex-girlfriend Sandy (Sarah Stiles) tells him she’s up for a female role (the nurse) in a sequel to “Romeo and Juliet,” he takes her place in drag, impresses the lead producer Rita Marshall (Julie Halston), and lands the job, unbeknownst to his writer roommate Jeff (Andy Grotelueschen) and agent Stan (Michael McGrath). In his Dorothy persona, he irks Ron in other ways, but wins the respect of the cast including leading lady Julie Nichols (Lilli Cooper), empty-headed hunk Max (John Behlmann), and the rest of the cast.

Michael falls for Julie right away, and it’s not long before Julie too finds herself strangely attracted to the charismatic “Dorothy.” Farcical complications abound as roles get confused.


The cast is marvelous across the board. Fontana’s role allows him to showcase his prodigious skills as a fine dramatic actor as well as a top musical talent, besides demonstrating, as never before, his impeccable comic timing. He navigates the male/female aspects of the role as brilliantly as Hoffman did in the film, but without imitating him, and creates a genuinely lovable character as Dorothy. At times he reminded me of Barry Humphries’ creation Dame Edna Everage. It’s only fair to specially single out Paul Huntley for superlative hair and wig design and Angelina Avallone for make-up.


Fontana has found just the right vocal timbre for his Dorothy songs without resorting to obvious falsetto. His audition piece, “I Won’t Let You Down” simultaneously impresses both the show’s creative team and us.


Cooper is wonderfully warm and empathetic throughout, with a lovely vocal delivery. Stiles -- looking a bit like a madcap Bernadette Peters -- has no trouble navigating her comic tongue-twisting showstopper. Sandy has been written far ditzier here than in the film.  Halston is spot-on perfect as the feminist producer, and lights up the stage with her every appearance. Grotelueschen, Rogers, and Behlmann all excel in riotous roles, and shine in their principal musical moments: “Jeff Sums It Up,” “I’m Alive,” and “This Thing,” respectively.


David Yazbek’s score -- back in traditional musical comedy mode after the Middle Eastern rhythms of “The Band’s Visit” -- is a delight from its bouncy overture onwards. The “Opening Number” (so-called) is intentionally generic, but thereafter, the ear is beguiled by some lovely ballads such as Julie and Dorothy’s “There Was John” and the duet “Who Are You?” for Michael and Julie and humorous numbers including, most witty, Sandy’s frenetic patter song  “Whaddya Do.”


The ensemble number, “The Most Important Night of My Life,” is also a standout, very well staged by choreographer Denis Jones, whose lively work enhances the show..


Robert Horn’s book (based on the film story by Don McGuire and Larry Gelbart) has more outright laugh lines than did the film, the humor of which sprang more from situation. (“It’s not a laugh comedy,” Pollack once said. “It’s Chekhov.”) Though some outmoded dialogue has been scuttled, this is still, in its essentials, a story of a man who becomes a better man by becoming a woman. And though the laughs are plentiful, poignancy has not been sacrificed.


There are significant plot changes from the movie whose screenplay was credited to Gelbart and Murray Schisgal, but with important uncredited contributions from Barry Levinson, Robert Garland, and Elaine May. Besides the change in setting, Julie no longer has an out-of-wedlock baby or a widowed father (who falls for Dorothy), and she no longer has a drinking problem as Jessica Lange’s character did in the film. Nor is she having an ongoing affair with Ron, though Ron does pursue her. Sandy is no longer a current girlfriend as was Garr, but an ex, which makes Michael’s falling in love with Julie less icky. The co-star who falls for Dorothy is not the aging Lothario played by George Gaynes but the dim-witted hunk.


David Rockwell has designed a bright cartoony looking set encompassing Michael and Jeff’s bachelor pad, the theater, the bar and grill where Jeff and Michael work, and other locales, lighted by Donald Holder with colorful costumes by William Ivey Long (and yes, the trademark red dress is here).


The whole is directed by Scott Ellis with an expert hand and exuberant flair.