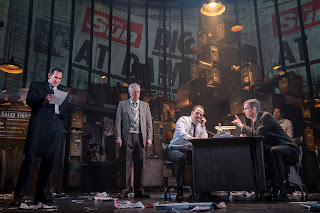 
James Graham’s hugely entertaining play -- a hit in 2017 at London’s Almeida Theatre -- about publishing magnate Rupert Murdoch’s acquisition of the failing British tabloid, The Sun, and his challenge to the increasingly aggressive editor Larry Lamb to bypass the circulation of the rival paper, The Daily Mirror, has come to Broadway with one of its leads, Bertie Carvel, as well as the overall creative team, intact.


Jonny Lee Miller, who has taken on Richard Coyle’s part in London,  gives a superb high-octane performance as the driven editor whose competitive tactics involve heavy emphasis on gossip, sensation, giveaways, and heightened coverage of television (then generally considered “competition” by the press).

It isn't long before he steps too far over the line of journalistic ethics by exploiting, against the advice of the authorities and his own staff, the paper's own deputy chairman Sir Alick (Colin McPhillamy) when the latter's wife is kidnapped, leading to tragic results. Less lethal but also morally questionable is his innovation of a naked Page 3 girl, as he convinces a beauteous staffer (Rana Roy) to be the first model.

Bertie Carvel, Australian accent and all, makes a thoroughly convincing Murdoch, charming and ruthless, though even he becomes squeamish when he feels Lamb has gone too far.


The tautly written play, by turns humorous and appalling -- think of it as “The Front Page” for the modern age -- brilliantly captures this ruthlessly competitive era of Fleet Street journalism, ca. 1969. The heady action is interspersed with musical interludes, choreographed by Lynne Page, which perfectly capture the freewheeling spirit of the period.


Michael Siberry is excellent as The Mirror’s editor Hugh Cudlipp, Lamb’s former boss, and an exemplar of old school journalism. (Can it really be 33 years since this actor first starred in the Royal Shakespeare Company’s “Nicholas Nickleby” revival on Broadway?), and there’s good work too from Andrew Durand; Eden Marryshow; Bill Buell; Tara Summers; Robert Stanton; and Erin Neufer as various staffers which Lamb has wrangled to work at The Sun. Some of the cast play two or more roles.


Rupert Goold, artistic director of the Almeida, directs the proceedings at a breakneck pace, and steers his cast to deliver finely detailed performances.