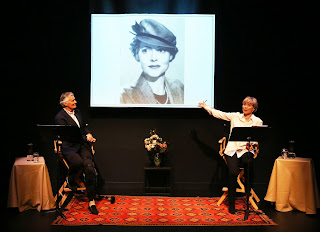 
Here’s a show that should be pure catnip to any British theater buff: the wartime correspondence between actress Celia Johnson (best remembered for her iconic performance in the classic film “Brief Encounter”) and her husband, travel writer (“Brazilian Adventure”), adventurer and journalist Peter Fleming, read by their daughter, actress Lucy Fleming (who compiled the letters into a theatrical evening), and her husband, Simon Williams, fondly remembered as James Bellamy on “Upstairs, Downstairs.”


The evening comes from London’s Jermyn Street Theatre where it was seen last year.


The letters roughly cover the period 1939 through 1945 when, after four years of marriage, Fleming was sent off to be stationed in New Delhi, while Johnson was ensconced at her husband's estate with her soon-to-be-widowed sister and sister-in-law and (eventually) eight children. During this arduous period, she managed to make three of her most memorable films, all written by Noel Coward: “In Which We Serve,” “Brief Encounter,” and “This Happy Breed.” And she somehow found time to do considerable radio work (e.g. a dramatization of “War and Peace”), serve as an auxiliary police woman, and very much more.


The letters -- along with the connecting narrative -- are voiced with effortless charm by Fleming and Williams accompanied by slide projections, as well as incidental music (by Simon Slater) and modest sound effects where appropriate.


The format may superficially sound reminiscent of A.R. Gurney’s “Love Letters” but actually, given the irregularities of mail delivery during the war, there isn’t quite the back and forth volleying one might expect, but Fleming has done an excellent job of making them as conversational as possible.


In any case, both express the same sentiments of affection, missing the other, and feeling a poignant sense of “endless separation.” Johnson says she never quite knows how to address her letters, and remarks it’s like “posting a letter to the moon.” There’s much humor in the correspondence, and they affectionately call each other “Mr. Flem” and “Mrs. Flem.”


The Johnson letters carry the lion’s share of the narrative, as she worries about management of the household (with its ever revolving door of cooks), and whether she’ll be able to accept this or that role, including two war-related films for director Carol Reed. There are fascinating tidbits about the filming of “Brief Encounter” with co-star Trevor Howard who, she discovered, was eight years younger than she, a fact that greatly disconcerted her. Filming often took place at night night far out of London where the arc-lights would not attract attention from the German bombers. Throughout, there were various royal visits, including those by the Queen Mother and her daughter, the present Queen Elizabeth 2.
“I have enjoyed making it a lot but I don’t really believe David Lean and Ronnie Neame know all they should about directing,” Johnson needlessly worries at one point about the fledgling director and cinematographer. And “I do hope I’m good in this film,” she later frets, ever modest.


We hear her first hand account of the incessant bombings during the blitz. In fact, her successful run of Daphne Du Maurier's “Rebecca” was curtailed when the theater was bombed after midnight.


And from the debonair and witty Williams -- offspring of distinguished parentage himself (actors Hugh Williams and Margaret Vyner) --   we hear of Fleming’s concurrent Intelligence work and other wartime assignments, including evading the Japanese when his plane crashed in the Burmese jungle. Besides the letters to Johnson, there’s one to their small son, Nicholas. There was an amusing anecdote about Fleming ordering up a private train to take him from Scotland home, after he missed catching one. Fleming’s brother was James Bond creator Ian, introduced with amusingly understatement as someone “who later had some success as a novelist,” and he, too, makes a few brief appearances in the narrative.


What does come through these letters vividly is the lost art of letter writing in this age of social media and emojis, as Williams articulates in his opening remarks. He speculates that likely the letters were intentionally preserved as a keepsake for their children to learn how it was during those difficult years, with a hope perhaps they would one day have a wider public forum.

L-R: Simon Williams and Lucy Fleming in POSTING LETTERS TO THE MOON at Brits Off Broadway at 59E59 Theaters. Photo by Carol Rosegg
Print this post
Posted by Harry Forbes at 8:05 AM