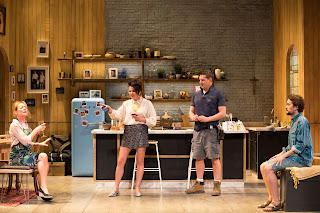 
Well, to begin with the positive, it’s certainly nice for us Anglophiles to have a solid contingent of accomplished English actors led by those pros Caroline Langrishe and Aden Gillett trodding the boards in New York. But I’m afraid the vehicle which brings them here is rather big feeble.


This putative comedy by Torben Betts -- apparently a rewrite of his play “Monogamy,” which had a London run -- registers like bottom-drawer Alan Ayckbourn.


Langrishe plays Caroline Mortimer, a famous TV cook who broadcasts from her own North London kitchen. Right-wing and ultra-religious (she was a theology major at Oxford, and a crucifix hangs on the back wall), she’s adored by the British public who look at her as the perfect embodiment of English domesticity.


But, in fact, she’s a completely self-absorbed egoist, an alcoholic, and an adulteress, as she’s conducting a torrid affair with her married carpenter Graeme (James Sutton). She never seems to have time to engage in conversation with anyone, no matter how urgently they need to speak with her. Her son Leo (Tom England) is home from Cambridge, desperately anxious to share details of a broken love affair and a related revelation (gee, what could it be?), Graeme also implores her for a word, and her steamroller personal assistant Amanda (Jasmyn Banks) needs her to focus on a potential scandal.


Amanda’s gotten word that “The Daily Mail” is about to run some embarrassing photos of Caroline falling drunk out of a taxi. This captures Caroline’s attention, but only barely.


Eventually, Graeme’s mentally unstable wife Sally (Elizabeth Boag) comes in for a reckoning with Caroline, but before she can make a big scene, Caroline’s hard-drinking, narrow-minded husband Mike (Gillett) bursts in from a game of golf and starts to flirt shamelessly with Sally, thinking she’s a potential buyer for their house. Every time it seems an increasingly tipsy Sally will spill the beans about Caroline’s infidelity, Mike whisks her away to show more of the house.


Despite the potential for humor in situation, this domestic farce is pretty laugh-free. The audience at my performance could only manage a few isolated chuckles at best. The setup is contrived, and the comic bits labored. As those farcical elements pile up, there’s simply no grounding in any kind of believability of the sort which makes the best farces work.


Caroline is clearly not drawn as a particularly sympathetic character, but Langrishe does her best to build herself up to an impressive lather. (I didn’t quite understand the relevance of her spirituality.) Mike is rather repellant, and consistently abrasive, as written. There’s a serious undercurrent here about family dysfunction, but not enough to give the play substance.


On their own terms, performances are solid, and director Alastair Whatley handles all the farcical action well, including scenes where all the characters are speaking simultaneously at cross purposes, and particularly when the play culminates in utter physical chaos. The sheer stagecraft at his point is admirable.