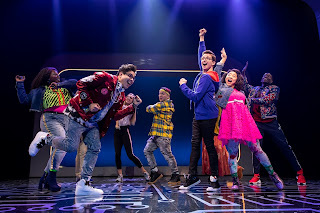 
After premiering in 2015 at the Red River Theater in Red Bank, N.J. (and generating a cast album that went viral with over 200 million online streams), the sci-fi musical by Joe Iconis (music and lyrics) and Joe Tracz (book) -- based on the 2004 novel by the late Ned Vizzini -- had an Off-Broadway run last year with a few cast changes, and has now made its way to Broadway.


Thematically, it resembles such shows as “Mean Girls” and “Dear Evan Hansen” in having a high school protagonist who feels woefully out of step with his classmates, and at least temporarily loses his best qualities by trying to be popular.


Jeremy (Will Roland) is a total loser. When he’s not feeling invisible, he’s the butt of jokes and bullying, and only makes things worse when he tries out for the school show to be near his crush, show geek Christine (very funny Stephanie Hsu). “I Love Show Rehearsal,” she sings proudly when they audition for the show, a post-apocalyptic production of “A Midsummer Night’s Dream.” His only friend is the laid back Michael (George Salazar). When his chief bully Rich (Gerard Canonico) suggests a pill called a Squip -- actually a Japanese microcomputer -- that will make him more cool (or “chill”), he decides to take it, despite Michael’s grave misgivings.


Sure enough, under the guidance of the Squip inside his brain -- personified by Jason Tam in Keanu Reeves mode -- he becomes popular but callous, and suddenly has no time for his true friend Michael, especially after the Squip blocks Michael from his range of vision. Christine, meanwhile, has taken up with the popular Jake (Britton Smith), so Jeremy begins to hang out with two of the popular girls, Brooke (Lauren Marcus) and Chloe (Katlyn Carlson) dating the former, and letting himself be tempted when the latter makes an aggressive play for him. His single father (Jason Sweettooth Williams playing two other roles as well), perennially depressed and not even bothering to wear pants at home, is eventually roused from his apathy. It’s only when Rich begins to unravel because of the Squip that Jeremy starts to realize he may be in trouble.


The cast is brightly dynamic starting with Roland who transforms convincingly from the awkward nerd of the early scenes; likeable Salazar scores with his showstopping “Michael in the Bathroom” lament; Hsu is appealing daffy throughout; and Tiffany Mann makes a standout impression as Jenna who combines a strong belt with serious operatic chops. She leads a clever 21st century updating of the “Bye Bye Birdie” telephone song called “The Smartphone Hour.”

As you can tell from the plot synopsis, the show has worthy themes of self-worth, being true to yourself, and making positive connecting with others while disconnecting from over-reliance on technology.


For a show plainly aimed at the teenage/early 20s crowd, which has responded so positively to the show, there’s entertainment value for their parents and adults in general. The tunes are catchy, the lyrics clever, and the situation alternately funny and poignant.

Photo: The Cast of "Be More Chill"
Credit: © 2019 Maria Baranova
Print this post
Posted by Harry Forbes at 7:12 AM