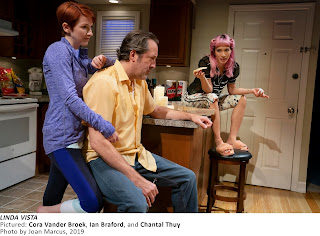 
A divorced man with a deep sense of self-loathing creates havoc for the women in his orbit in Tracy Letts' somewhat overlong, but sharply written, consistently absorbing and exceedingly well acted play which premiered at Chicago’s Steppenwolf Theatre Company in 2017, and received its West Coast premiere earlier this year at Los Angeles’ Mark Taper Forum.


Wheeler (Ian Barford), the play’s central character, was a once-promising photojournalist, but saddled with a profound lack of self-esteem, he's now content to toil in a dreary camera repair shop under a loathsome boss Michael (Troy West) who, when not contemplating suicide, is sexually harassing their co-worker Anita (Caroline Neff), a sturdily unflappable young woman recovering from addiction and determined not to backtrack.


Wheeler’s sardonic friend Paul (Jim True-Frost) has just helped him move to a two-bedroom condo in the San Diego neighborhood that gives the play its title, and in short order, Paul and his wife Margaret (Sally Murphy) set Wheeler up on blind date with Jules (Cora Vander Broek), a life coach with, she reveals, a degree in “Happiness.”  Despite Wheeler’s serious misgivings, he and Jules, in fact, hit it off, and begin what would appear to be a promising relationship.


But matters become complicated when Wheeler’s neighbor Minnie (Chantel Thuy), a free-spirited 27-year-old Vietnamese drifter, knocks on his door and begs for shelter after breaking up with an abusive boyfriend.


Barford is quite extraordinary throughout, running the gamut of emotions, and he’s barely offstage. His character’s sense of intellectual superiority and his innate narcissism make it hard for us to stay in his court for the duration. But his sense of humor -- and Letts has provided him with some very funny lines -- keeps him mostly likeable so that we can see how it is that he can appeal to the women who should know better. Unfortunately, his bad behavior eventually erodes our sympathy, and at my performance, he was even hissed at several points.


Suffice to say, it’s an admirably vanity-free performance. He’s playing a greying, middle-aged, paunchy character, and along with the women involved, fearlessly bares it all in two extraordinarily graphic sex scenes.


The other cast members are spot-on perfect. too. Broek conveys Jules’ cheerful optimism and heartbreaking grief when her relationship with Wheeler goes south; Thuy juggles her character’s streetwise toughness but also vulnerability; and Neff convincingly maintains a no-nonsense pragmatism in the face of an abusive work situation. West starts out as a pitiful loser, but morphs into something more sinister. True-Frost is solid as the loyal friend who, in a well-written locker room scene, pulls no punches in explaining the facts of married life to Wheeler, and Murphy as his no-nonsense wife really delivers the goods in her big second act scene.


Besides drawing fine performances from his cast, director Dexter Bullard keeps the humor and pathos in Letts’ script in expert balance. At first, Letts’ dialogue -- funny though Wheeler’s wisecracks are -- gives the play the superficial air of sitcom writing, albeit of a superior brand, but as the narrative progresses, and the more serious themes come to the fore, the play takes on a gravitas.


At two hours and 40 minutes, the play could benefit from a bit of trimming, though I can’t say I was bored for a moment.