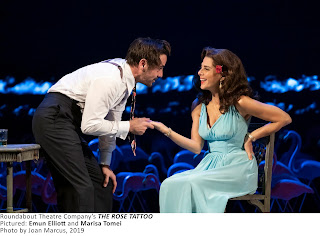 
Tennesse Williams’ Tony Award-winning 1951 play hasn’t been seen on Broadway since the 1995 revival with Mercedes Ruehl and Anthony LaPaglia at Circle-in-the-Square, so it’s been overdue for another mounting. I’m happy to report that Roundabout’ s production, imaginatively directed by Trip Cullman, is a very worthy one, both moving and bracing.


The production began life at the Williamstown Theatre Festival in 2016.


The play’s not as well known as the other Williams chestnuts, and the 1955 Anna Magnani-Burt Lancaster film, once a television staple, doesn’t get much airplay these days, so it comes with an inherent freshness.


The setting is somewhere on the Gulf Coast circa 1950. Serafina (Marisa Tomei) is a devoutly religious dressmaker smitten with her truck driver husband Rosario who drives a banana truck (but smuggles illegal goods beneath the bananas). Serafina likes to tell anyone who will listen that on the night her young daughter Rosa (Ella Rubin) was conceived, Rosario’s rose tattoo magically appeared on her breast for a few miraculous moments, and she knew she was pregnant. And now she's expecting another child.


She longs for her husband’s return (as this is the last time he’ll risk carting the contraband), but before long, the neighborhood women -- who throughout the production sing Italian folk songs and serve as something of a Greek chorus -- gather ominously to impart the news that he has been killed. Hysterical with grief, she is transformed into a sorrowful widow with his ashes prominently on display. Three years pass. Nearly everyone else seems to know Rosario had been cheating on her with a blonde blackjack dealer named Estelle (Tina Benko), but Serafina won’t hear a word of it. She becomes overprotective of Rosa, now 15 and about to graduate, and keeps her locked up in her room. But Rosa has nonetheless managed to meet a shy, sweet sailor (Burke Swanson) whom Serafina makes swear in front of her shrine to the Blessed Virgin that he’ll respect Rosa’s honor.


This first act is, as you might expect, full of highly-charged drama and the tragedy of Serafina’s unexpected widowhood. But in the second, truck driver Alvaro (Emun Elliott) with, as Serafina puts it, her husband’s body but the face of a clown, barges into her home after a comically violent encounter with an aggressive salesman (Greg Hildreth). Suddenly, Williams shifts gears and tragedy turns to something akin to outright comedy. And that mood is sustained till the end.


Tomei, though not the plump character described by Williams (though Clint Ramos’ costumes do their best to deglamorize her), nails both the grieving, volcanic widow, and the insecure woman yearning for love, who finds herself attracted to the unlikely stranger. Elliott, a Scotsman by birth though you'd never guess it, is highly entertaining in his role as the hunky doofus. And the pair play marvelously well together, and with superb comic timing when it’s called for.


All the other roles are well cast too. Rubin as the loving but defiant daughter; Swanson the conflicted nice guy seaman; Carolyn Mignini as the caring neighbor Assunta; Cassie Beck as Rosa’s school teacher; Constance Shulman as The Strega whose “evil eye” Serafina fears; and Paige Gilbert and Portia as two of Serafina’s sharp-tongued clients.


It’s rare to think of a Williams play as a “feel good” experience, but this one really is, and my audience responded very warmly at the end.


At first, the cod Italian accents take some getting used to -- there’s a radio broadcast of role originator Maureen Stapleton who carried her accent much more lightly, though of course Magnani in the film was the real deal -- but soon the ear adjusts.


Some found Mark Wendland’s set design misguided, and it certainly causes a bit of spatial confusion. Serafina’s house is built so abstractly that you never quite know whether the characters are indoors or out. But with its brightly colored shrine to the virgin, and attractive vista of the foamy waves on the shore providing a striking panoramic backdrop (projection designer Lucy Mackinnon), not to mention of a line of plastic pink flamingos. the eye is constantly beguiled, so on balance, I didn’t mind the mild disorientation. Ben Stanton provided the apt lighting.


Cullman’s staging seems right in step with Williams. Some have complained that the gravitas of the work has been undercut by the comedy, but I felt strongly that Cullman and his cast never for a moment lost sight of Serafina’s sorrow, even as we enjoy the cat-and-mouse seduction between her and Alvaro.