The Sound Inside (Studio 54) 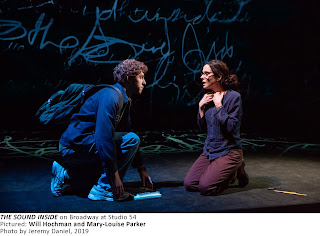 
Mary-Louise Parker is truly outstanding as Bella, a troubled Yale English professor, who develops an unlikely friendship with Christopher, a promising if prickly student (wonderfully played by Will Hochman in his Broadway debut).


The less one knows of the action of Adam Rapp’s riveting play, the better, but it’s no spoiler to reveal that we learn early on that Bella’s job at the university is basically her whole life, she has an uneventful love life, and that she has been diagnosed with cancer. She published a novel 17 years earlier, as well as a couple of slender volumes of short stories. But there’s been no literary follow-up since. Budding novelist Christopher shows up one day at her office without the requisite  appointment, and despite his blunt manner, and his rather alarming diatribe against the evils of email and Twitter, Bella is intrigued. After a few such visits, she invites him to dinner.


In short order, Christopher revitalizes her on both the literary and interpersonal fronts, and he begins to share with her the compelling narrative of his novel-in-progress, inevitably charming her with his sincere appreciation of both her class and her novel which he has tracked down.  But the play is constantly surprising, not in any way playing out along predictable lines.


It was commissioned by Lincoln Center Theater and premiered at the Williamstown Theatre Festival last year.


The most unusual aspect of the physical production is that it is played on a mostly darkened stage, though sections are illuminated by pools of light as the action demands. Lighting designer Heather Gilbert, in tandem with scenic designer Alexander Woodward, masterfully visualize the emotional texture of the piece which over the course of its 90 intermission-less minutes, and manages, despite its sparseness, to encompass Bella’s office, apartment, a restaurant, and other locales.


Rapp has constructed the piece so cleverly, he keeps you guessing about what will happen next, and there are several unexpected twists along the way. Bella’s narrative -- a marathon role for Parker -- is written with much the same literary precision that characterizes that of the writers both Bella and Christopher admire. The play begins with a tremendously long monologue for Bella in which she relates her backstory, but in truth, apart from the scenes with Christopher, the entire play might be seen as one big monologue, and a most fascinating one at that.


David Cromer directs with nuanced sensitivity and under his expert guidance, neither performer makes a false move.


The title derives from a writing exercise Bella gives her students, but I’ll say no more. This is the kind of play that, like the best of them, keeps you thinking about it long after the proverbial curtain falls.