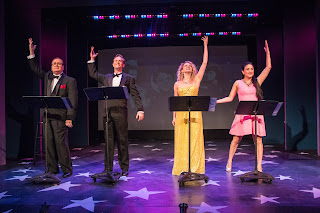 
I must confess I feared that Musical in Mufti’s revival of creator Ben Bagley’s 1965 revue of Cole Porter’s songs -- originally staged less than six months after the composer’s death -- might come across as terribly passe. And certainly the show’s heralding of at-the-time “neglected” Porter material would surely not still be the case. After all, thanks to enterprising groups like Encores, the New Amsterdam Theater Company, Musicals Tonight, Medicine Show, and Mufti itself, all of the shows from which these rarities derive have been revived in full, and in some cases, recorded.


Additionally, dedicated Porter champions such as Steve Ross and the late Bobby Short (who appeared in one of the original editions of the show) have further resurrected an enormous spectrum of his songs.


But much to my surprise, this revival -- which faithfully utilizes Bagley’s original linking narration -- registers as fresh as ever, thanks to resourceful director Pamela Hunt and a particularly well chosen and attractive cast comprising Danny Gardner, Lauren Molina, Diane Phelan, and Lee Roy Reams.


And remarkably, although die-hard show buffs will recognize the purview of most of the songs, the show’s adventurous playlist is still, I’m reasonably certain, unfamiliar to most audiences.


Molina is a delightful comic presence throughout the show, though she also scores on the more thoughtful ballads too, like “I Loved Him (But He Didn’t Love Me)” and “Down in the Depths (on the Ninetieth Floor).”  It was interesting to hear her contrasting, but equally valid, interpretations of the “Fifty Million Frenchmen” numbers which we had just heard a couple of weeks ago in York’s presentation of that show.


Phelan received two of the biggest ovations at my performance with her feelingly vocalized “I Happen to Like New York” and then “After You, Who?” in the second act. She demonstrates her comedic chops with Beatrice Lillie’s “When I Was a Little Cuckoo” and her naughty duet with Gardner on “But in the Morning, No!”


Veteran Reams starts things off as an affable narrator, later offering solid renditions of “I’m in Love Again,” “I’m a Gigolo” and “Experiment,” and along the way, giving vent to his inner Marlene Dietrich and Sophie Tucker.  Mutli-talented hoofer Gardner reminds us what a polished singer he is with such chestnuts as “At Long Last Love” and “I Worship You,” the latter also from “Fifty Million Frenchmen” and, of course, dances as impressively as always to Trent Kidd’s bright choreography.

Eric Svejcar’s keyboard accompaniment is deft and often exciting, like his spirited rendition of “Anything Goes” in the show’s overture, and adds vocal harmony to such numbers as “Let’s Fly Away.”


Projected photos of Porter, courtesy of projection designer Jamie Goodwin,  pay homage to the original production concept of projected paintings. The creator of those images, Shirley Kaplan, appeared at the post-show talkback at my performance, and spoke warmly of creator Bagley.


Based on the extant CD of the 1965 show, which includes not only the greatly abridged original studio cast LP, but live performances, York’s production proves faithful to the song selection (if not always the gender of the vocalist on individual numbers) and Bagley’s original linking narration which made a point of the contrast between the serious world events from the First World War and beyond and Porter’s blithely urbane and witty songs.


Though original cast members Kaye Ballard, Harold Lang, and the others were inimitable, all in all, the vocal stylings of York’s cast makes for a smoother overall listen.


Far though we are from the ethos of the mid-1960s, Hunt and her talented cast made the show much more than just an interesting relic, and perhaps, I would suggest, one that could sustain a fully staged regular run.