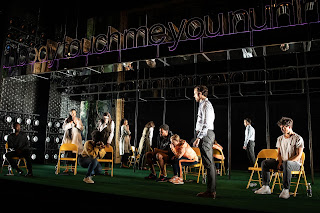 
This provocative, often humorous, intentionally disturbing play by wunderkind Jeremy O’Harris has come to Broadway after premiering to acclaim last year at New York Theatre Workshop. I didn’t see it there, but visually, I can report it looks just fine on the larger stage of the Golden.


Without revealing more spoilers than necessary, let me say the play divides into three distinct sections. In the first part, we observe the sexual shenanigans between an antebellum female slave and her overseer; a plantation mistress and her Negro manservant; and an indentured white servant and, incongruously, the male slave under whom he labors. (In these sections, sexual content is high and fairly graphic.)


In the next (and longest) section, we find ourselves at a mixed-race couples counseling session ("antebellum sexual performance therapy"). It’s designed to help black partners reconnect with their white partners from whom they are no longer receiving sexual pleasure, a phenomenon labelled racial identify dysfunction (RID).


The session is run by partners (personal and professional) black Teá (Chalia La Tour) and hispanic Patricia (Irene Sofia Lucio). The humor of their psychobabble here is deliciously spot-on. The participants comprise Kaneisha (Joaquina Kalukango, the one replacement in the otherwise intact Off-Broadway cast) and her white British husband Jim (versatile Paul Alexander Nolan); black Gary (Ato Blankson-Wood) and his actor boyfriend Dustin (James Cusati-Moyer); and Alana (Annie McNamara) and her light-skinned black husband Phillip (Sullivan Jones). The concluding part offers us a dramatic encounter between Kaneisha and Jim which distills all that has come before.


The cast is superb with Cusasti-Moyer, McNamara, and Jones especially generating big laughs. Cusati-Moyer embodies the archetypal self-absorbed actor and one who refuses to identify as white but, on the other hand, never precisely defines his ethnicity, McNamara an overly earnest acolyte of the group desperately referring to her notes for clarity but, in fact, clueless to her own issues; and Jones playing endearingly befuddlement until clarity finally dawns.


For their parts, La Tour and Lucio are a hoot as the impassioned facilitators, relentlessly determined to “process” every moment, cheering each emotional outburst as a positive breakthrough, while inadvertently revealing that they too have some serious interpersonal issues. They are very funny, and Lucio is particularly so when she allows Patricia’s Latina heritage to surface when it suits her.


Blankson-Wood, Kalukango and Nolan have the more serious roles, and the last two bring the play to its emotional conclusion. Kalukango, mostly silent for the long second part, has a huge monologue in the last, and impresses with her raw emotion, though elsewhere I had occasional audibility issues with her dialogue.


Harris’ themes of racial identity and racial trauma, and the psychological warfare of white supremacy, all of which, he contends, have their roots in slavery, are intriguing, though I’m not sure I quite buy all of it. He’s clearly a terrific writer, as demonstrated last season by “Daddy” at The New Group, another lengthy and interesting work, albeit less brilliant than this.


The intellectual arguments, interesting though they are, get a little bogged down with talkiness both in the counseling session scene and in Kaneisha’s lengthy concluding monologue. And the play could benefit by a bit of trimming. (As it is, “Slave Play” -- its title a punning reference, by the way -- runs two full hours without a break.)


Clint Ramos’ set design -- a mirrored surface in which the audience sees its own reflection, as well as a plantation panorama projected on the mezzanine balustrade -- is attractive,  though clearly meant to make us feel uncomfortable. Jiydun Chang provides some striking lighting effects which tellingly enhance the play, particularly during Kaneisha’s harrowing monologue. Lindsay Jones’ sound and original music add to the mood.  Dede Akyite antebellum and contemporary costumes are, respectively, fun and character defining.


Director Robert O’Hara -- himself an award-winning playwright -- directs both halves most persuasively, and navigates the play’s serious and humorous mood shifts deftly.