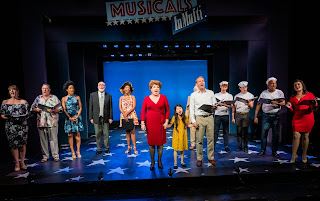 
Cole Porter’s 1940 hit which, by all accounts, featured Ethel Merman in peak form is, truth to tell, not one of the great man’s best scores. But as escapist entertainment in that tense period leading up to U.S. entry into World War II, it seems to have fit the bill, especially with sumptuous costumes by Rauol Pène du Bois, choreography by Robert Alton, and a huge cast. The serviceable, fitfully amusing, book was by Herbert Fields and B.G. DeSylva.


Shorn of the spare-no-expense trappings and its high-powered leading lady, the property’s shortcomings are apparent, as was evident when Musicals Tonight resurrected the piece in 2010 in a similarly barebones production. The current Musicals in Mufti presentation has an edge with the casting of dynamic Klea Blackhurst, who has made a specialty of channeling Merman. Though technically older than she should be for the role (Merman was only 32), Blackhurst pulls it off bringing plenty of pizzazz to the part, socks over the songs in leading lady fashion, registers as effortlessly likable, and knows how to play the heart-of-gold, lower-class dame to a tee. She doesn’t try to impersonate Merman, but her voice has the requisite ping.


Hattie’s a plain talking, vulgar-dressing chanteuse in a dive in the titular canal zone. She needs a touch of class now that her fiance Nick (solid Stephen Bogardus), a divorced State Department guy with an important position in the strategically important control tower, is bringing eight-year-old daughter Geraldine (pint-sized marvel Kylie Kuioka), whom he hasn’t seen since she was a baby, to live with them. Sure enough, the girl finds Hattie’s vulgar fashions irrepressibly funny, and the two get off to a rocky start. But Hattie eventually wins over the girl, and the two bond in the hit song, “Let’s Be Buddies.” But her troubles are far from over, as snobby rich girl Leila (Casey Shuler who nails the unlikable schemer) is determined to scuttle Hattie’s engagement to Nick.


Three womanizing sailors (Jay Aubrey Jones, Garen McRoberts, and Joe Veale, all amusing) are on hand for comic relief with burlesque humor, and, along with Hattie, successfully foil a spy caper.


There are a handful of Porter chestnuts throughout the mostly B-level score, including Hattie’s “I’ve Still Got My Health,” “I’m Throwing a Ball Tonight” (a favorite of the late Bobby Short), “Make It Another Old Fashioned, Please,” and “My Mother Would Love You.” There was no full cast LP, but Merman recorded four of the songs. MGM later made a film version with Ann Sothern in Merman’s role, and Broadway’s Rags Ragland recreating his sailor role, but as was so typical of Hollywood at the time, most of the score was jettisoned.


As indicated, Blackhurst is surrounded by strong cast. Welch performs her second-banana role most enjoyably, though can’t really elevate her two admittedly not-so-hot numbers, “Fresh as a Daisy!” and “All I’ve Got to Get Now is My Man.” Kuioka, off-book all evening, is quite remarkable. Jones, fresh from the “Downton Abbey” movie and still sporting his King George V beard, is luxury casting, and plays his stuffy but lovable role to perfection. Gordon Stanley has a convincing turn as Nick’s boss who initially gets the wrong idea about Hattie. Jones is particularly good in the Ragland role.


Deniz Cordell on piano and David White on bass provide the lively accompaniment.