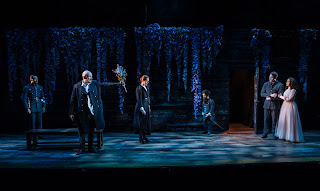 
This isn’t the first time someone has musicalized Edmund Rostand’s enduring tragicomedy, and it surely won’t be the last. From Victor Herbert’s rarely revived 1899 operetta version to Franco Alfano’s 1936 opera. And in terms of Broadway style musicals, let’s not forget the 1973 “Cyrano,” which won star Christopher Plummer a Tony Award, and the not bad but unsuccessful 1993 Dutch “Cyrano: The Musical.”


The current offering, which enjoyed a developmental production at Goodspeed Musicals last year, has music by Aaron Dessner and Bruce Dessner of The National band, with lyrics by Matt Berninger of The National and Carin Besser. On first hearing, I picked out several attractive numbers (“Someone to Say,” “Southern Blood,” “Defenseless,” among them) and they’re well performed in Mary-Mitchell Campbell’s arrangements under Music Director Ted Arthur.


The main draw here is, of course, star Peter Dinklage, fresh from his eight-year run on HBO’s “Game of Thrones.” Cyrano’s prominent proboscis takes very much second place to the star’s diminutive stature, though the nose is mentioned when Cyrano’s rival, De Guiche (a superb Ritchie Coster), challenges Cyrano: “Your nose...is it not...large?”


Otherwise, most of the nose references are excised and Dinklage does not wear a prosthetic appendage. But director Erica Schmidt’s adaptation is, on the whole, faithful to the structure of the original, even though everything is streamlined, characters have been dropped, and there are some alterations to the storyline. Roxanne doesn’t, for instance, visit the battlefield here. Cyrano is not fatally wounded by a falling log, and so on.  But, by the end, I was as moved as by any production I’ve seen before.


The dialogue is colloquial; the opening line of her adaptation is Roxanne’s “Oh, wow!” and when Cyrano castigates Mountfluery (here Montgomery), he demands, “Who will defend this shit?” But that rather self-conscious updating settles down shortly.


I’d be lying if I said that Dinklage’s assumption of the poet-soldier, capable of fighting off 100 men, doesn’t take some initial suspension of disbelief, but one adjusts quickly enough, and the actor’s portrayal of the gruff military man afraid to express his true feelings for fear of rejection, is touchingly played. Some Cyranos are too poetic, forgetting that he’s first and foremost a soldier, but Dinklage doesn’t fall into that trap. HIs enthusiasm early on about what he thinks will be Roxanne’s profession of love is endearing, and his wooing (through his mouthpiece, the handsome Christian) is nicely done. As for his singing voice, well let’s say it’s somewhere between Bob Dylan and Lee Marvin’s graveley “Wandrin’ Star”  in “Paint Your Wagon,” but it’s effective. 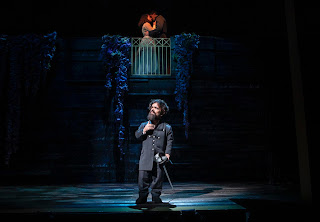 Schmidt, who’s married to Dinklage, elicits good performances from the cast all around. Jasmine Cephas Jones, so familiar as Peggy Schuyler and Maria Reynolds  in “Hamilton,” is a lovely and believable Roxanne. Schmidt has given the character a little more agency than usual, but the feminist angle is not overdone. Blake Jenner nails the good looking but tongue-tied Christian who tries to do the noble thing at the end when Roxanne confesses that she loves not his looks but his soul. Grace McLean has some winning moments as Roxanne’s tart chaperone Marie. There’s good work too from Josh A. Dawson (Le Bret), Hillary Fisher (Sister Claire), Christopher Gurr (Jodelet), Nehal Joshi (Ragueneau), Scott Strangland (Montgomery), and Erika Olson (Ensemble). Voices are excellent. Choreography is provided by Jeff and Rick Kuperman.


Of non-musical versions, my benchmark productions would have to be the Derek Jacobi-Sinead Cusack Royal Shakespeare Company production of 1983, and more authentically, a fabulous and lavish Robert Hossein production in Paris with Jean-Paul Belmondo in 1990.


Christine Jones and Amy Rubin’s set design, expertly lighted by Dan Moses Schreier, economically conveys all the requisite settings from the theater of the opening scenes to Roxanne’s balcony, the battlefield, and finally, the convent with its falling leaves. Tom Broeker’s costumes are attractively traditional.


Below: Peter Dinklage, Jasmine Cephas Jones and Blake Jenner
Print this post
Posted by Harry Forbes at 8:53 AM