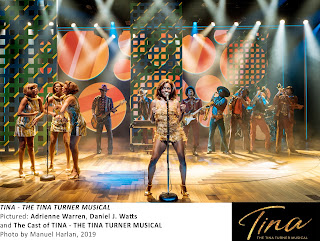 
On the pop singer jukebox musical bio scorecard, the latest -- an import from London -- rates remarkably high. With its better-than-average book, eye-catching production, and impressive leading lady, “Tina” lands more in the superior “Beautiful” and “A’int Too Proud” league than, say, “Summer” or “The Cher Show.”


Mind you, the show still fits the by-now formulaic mode of most these shows, and there are plot similarities with some of these others too: skeptical record label, abusive husband, and an artist managing to find her own voice, but I guess such is the nature of the pop business, and, in particular, of women in a pre-MeToo era.


Bearing in mind that the book is mainly a vehicle upon which to hang the hit parade of songs, the one fashioned by Katori Hall (with Frank Ketelaar and Kees Prins) has some surprisingly strong dramatic scenes, and doesn’t flinch from some of the more unpleasant aspects of its subject’s life. (A quick perusal of Wikipedia’s Tina Turner entry would seem to confirm the general accuracy of the storytelling here, however simplified.) And with England’s Phyllida Law at the directorial helm, and an overall solid cast, the dramatic scenes are given their due. The domestic episodes, Turner’s in-studio conflicts about her style, and a late scene in the hospital where her mother lies gravely ill are especially potent. 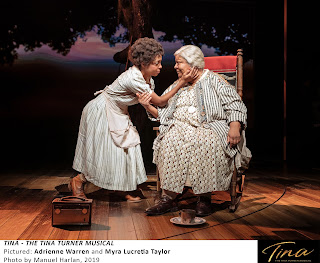 Beginning with a seated Tina chanting her Buddhist mantra, we flash back to her childhood as a precocious child (dynamic Skye Dakota Turner) singing her head off at a Baptist meeting. Her mother (very strong Dawnn Lewis) berates her at home for being so loud, leading to a tense dramatic scene with the parents fighting and the mother moving out with Tina (then called Anna Mae)’s sister. Tina’s father (David Jennings) deserts her, and she goes to live with her grandmother (excellent Myra Lucretia Taylor) then as a teenager, back to her mother and sister where, out with her sister for a night on the town, she meets Ike Turner (Daniel J. Watts), and their professional partnership, and later, unhappy marriage, is born.


Tina eventually breaks loose of Ike’s physical abuse, and she strikes out on her own with two boys to raise, one Ike’s, the other fathered by a sympathetic musician (Gerald Caesar) in their band, falls on hard times, but eventually, in London, finds her own voice with the help of a new manager Roger Davies (Charlie Franklin), and Erwin Bach (Ross Lekites), a German marketing professional, 16 years her junior, who falls in love with her, and would later become her husband.


The domestic scenes are reasonably meaty, anchored as they are by a solid acting cast, including Steven Booth as Phil Spector, Robert Lenzi as a Capitol Records executive, Jessica Rush as Rhonda, her first manager and friend.


Adrienne Warren, who we’ve seen in “Shuffle Along” and “Bring It On: The Musical” here, made a deserved splash when this show started in London, and she’s sensationally good, nailing the character from teenage years upwards, and singing and dancing tirelessly throughout. Though not a physical dead ringer for Turner, she captures the character, the gritty sound, and the kinetic moves, and incredibly, rarely leaves the stage. How much more satisfying to have a single actor play the role, than the triumvirate approach adopted by “Summer” and “The Cher Show”!


Mark Thompson’s sets and costumes are immensely satisfying, and the climactic moment of Turner making her entrance for a big concert in Brazil is a dazzlingly gorgeous coup de theatre, not to mention the thrilling mini concert that ensues. Jeff Sugg’s projection attractive projection design adds to the fluid nature of the show. Choreographer Anthony Van Laast recreates the trademark moves.


Ethan Popp’s orchestrations are satisfying, and most of the songs are done complete, not in the medley form favored by many of the other jukebox shows. Nicholas Skilbeck is the talented conductor credited with arrangements and additional music.


My major carp is Nevin Steinberg’s overloaded sound design. Not only are the musical numbers pitched way too high, but the balance seems seriously off with lyrics barely intelligible, and the orchestra overpowering the voices consistently, a complaint mentioned by several at my performance.