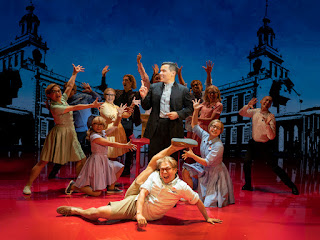 
Conceived as a sort of reverse spin on “The King and I,” “Soft Power” is a modern-day East meets West story, but this time, told from the viewpoint of China in the person of a Shanghai theater producer who eventually bonds with, of all people, Hillary Clinton.


When playwright David Henry Hwang started crafting the play that became this musical (late 2015), he was seriously stabbed in the back one night by an unknown assailant. He nearly died but when he recovered, decided to work that incident into the play.


So “Soft Power” now concerns a fictional David Henry Hwang (non-lookalike Francis Jue) who meets with the aforementioned Chinese producer Xuē Xíng (a dynamic Conrad Ricamora). Xuē implores Hwang to adapt a famous movie -- a husband and wife are attracted to other people, but end up unhappily staying together --  to the musical stage with the hopes of it becoming a worldwide hit. Hwang gives it a try, but feels he cannot agree with Xuē about the ending which he feels is unrealistic to a modern audience, and he and Xuē come to an impasse. When Hwang is stabbed, the action we have seen thus far is reprised in a heightened fantasy version, but this time, Xuē has no Chinese accent and we are in a full-out musical set in a crazy quilt version of New York..


When he meets Hillary, he is smitten, and they strike up a romance of sorts, and rather in the manner of Anna Leonowens, he patiently teaches her the rudiments of pronouncing his name properly. (There’s a later riff on “Shall We Dance,” too.) After her presidential defeat, which Xuē takes as emblematic of the failure of the U.S. political system (and there’s a funny number about the electoral college), he tries to convince her that things would be better for the two of them in China, but Hillary refuses to lose faith in democracy. That central argument as to whether democracy still “works” is the crux of the play, and Hwang’s arguments pro and con are always intriguing.


There’s an amusing panel sequence which opens the second act wherein, 50 years hence, the Chinese participants look back on this musical as a major game changer in musicals being able to take on more serious subject matter. The one American on the panel is helpless to contradict his Chinese colleagues’ proud sense of ownership.


Jeanine Tesori has written the score (with lyrics by Hwang and herself), and it’s been lushly orchestrated by Danny Troob. The show features traditional dance numbers (lively choreography by Sam Pinkleton)  and an orchestra of 23 players. A bit annoyingly, as is often the case with musicals that pride themselves on the songs being so integral to the script that they don’t merit singling out in the program, there’s no song list provided, though the script does.


But suffice to say, the numbers are molded in time-honored Broadway style, are tuneful enough on first hearing,  and both Ricamora and Louis have strong ballads, “The New Silk Road” and “Democracy” respectively. Louis also has an amusing post-election lament, “Song of the Campaign Trail” near the top of the second act while she simultaneously sings and gobbles pizza and pistachio ice cream in her depression.


As stated, Ricamora is particularly strong, both vocally and dramatically, and Louis is another bright talent, strong-voiced and looking enough like Mrs. Clinton to be convincing. Other multiple roles are capably taken by Austin Ku, Raymond J. Lee, Jaygee Macapugay, John Hoche, and Kendyl Ito.


Clint Ramos’ sets lighted by Mark Barton -- from the red Dragon Entertainment Group office to a glitzy fantasy McDonalds to the Golden Gate Bridge (incongruously but amusingly set in New York) -- are attractive, including the orchestra’s multi-level platform.


Not one for the ages, but “Soft Power” is certainly an interesting and enjoyable curiosity, given a first-class production. And good to see so much Asian talent on impressive display.


Photo by Joan Marcus: Conrad Ricamora and the company of Soft Power.
Print this post
Posted by Harry Forbes at 12:49 PM