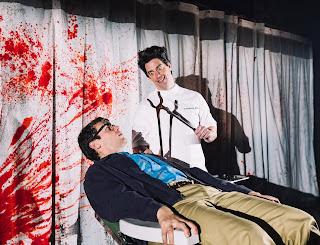 
Director Michael Mayer’s first-rate revival of composer Alan Menken and late lyricist and book writer Howard Ashman’s tuneful and enduring adaptation of the Roger Corman comic horror film -- unlikely source material when it premiered at the WPA Theatre in 1982 -- is anchored by its three sterling leads, and a strong supporting cast.


Jonathan Groff is the sweet-natured, put-upon Seymour who works in a skid row flower shop. Tammy Blanchard is his secret crush Audrey involved with a cruelly abusive dentist named Orin played to lip-smacking perfection by Christian Borle who also takes on a highly amusing succession of other roles in the second act.


The shop, run by beleaguered Mr. Mushnik (Tom Alan Robbins) is failing miserably, until an unusual plant being nurtured by Seymour is put on display, and suddenly business booms. The only problem is that Seymour soon learns the plant -- which actually speaks (basso Kingsley Leggs) -- thrives on human blood, and when fed a few drops begins to grow at an astonishing rate. But as the demands of Audrey II (for so the besotted Seymour has named it) get more forceful -- “Feed me,” the plant demands -- and more substantial meals are needed, you can guess who the first victim will be.


Commenting on the action most delightfully are three soulful neighborhood gals known as the Urchins (Ari Groover, Salome Smith, and Joy Woods, each one a vivid personality) who harmonize in doo-wop style  Their lyrics were not always comprehensible, but that may have been due to the sometimes overamped sound design (Jessica Paz).


Audrey II is a simply amazing feat of puppetry, as designed by Nicholas Mahon from Martin P. Robinson’s original puppet design. As the plant grows, given the small theater, the effect is something akin to that of the King Kong puppet in the recent musical, and no less scary when it approaches the audience.


Without sacrificing any of the property’s inherent laughs, Groff and Blanchard play their parts absolutely straight. Seymour’s quandary of doing the moral thing or giving the bloodthirsty plant what it needs so he can continue to bask in his newfound celebrity, is convincingly acted. And Blanchard makes Audrey’s plight at times heartrendingly real. 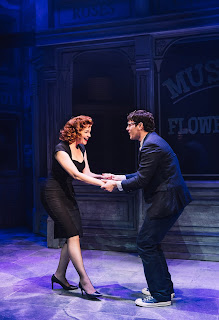 I didn’t see the original Off-Broadway production nor the more recent Encores staging with Jake Gyllenhaal, but I did catch the Jerry Zaks Broadway revival which had a healthy, nearly year-long run, and had its virtues, though it lost the original intimacy that the current production at the 270 seat Westside Theatre restores.


The infectious rhythm and blues score sounds terrific in Will Van Dyke’s arrangements and orchestrations.


Mayer has directed with his usual reliable savvy, wringing every bit of humor out of Ashman’s script, and the pathos underneath. Ellenore Scott has provided the neat choreography.


Below: Tammy Blanchard and Jonathan Groff in Little Shop of Horrors
Print this post
Posted by Harry Forbes at 8:26 AM