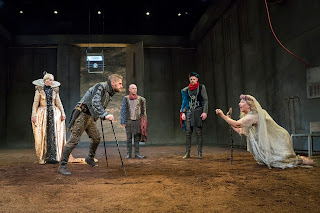 
After enduring so many well-intentioned local productions that flatten Shakespeare’s language and alter the Bard’s meters to sound oh-so-contemporary, it’s a genuine pleasure to hear actors who have complete facility with the language.


It’s not a matter of using posh English accents. Dublin’s DruidShakespeare company is, in fact, attractively Irish inflected, but they know how to speak the text giving it plenty of naturalism, and rendering it relevant to a modern-day audience, with at the same time, not losing the requisite period flavor.


This skill is evident from the moment the great Aaron Monaghan as the conniving Richard pops up from the downstage trap door which will later be used to dispatch all his many victims, and addresses us with “Now is the winter of our discontent.”  We can relax knowing from the start we’re in experienced hands.


As gleeful and enjoyably (for us) malevolent as he plays Richard for the first half of the play, he shows us the vicious side of his voracious ambition in the second as he becomes increasingly monstrous. Artfully manipulating walking sticks in each hand, his leg bent out, he gives a performance of impressive physicality and verbal dexterity, holding his own and then some with memories of such great Richards as Ian McKellen, Antony Sher and even Laurence Olivier.


The production, in association with the Abbey Theatre, opened to raves last year in Dublin. With a cast of only 13, director (and Druid co-founder) Garry Hynes manages to give us all the characters with some clever doubling of roles. The young princes, for instance, are taken by women (Siobhán Cullen and Emma Dargan-Reid), and the Lord Mayer is portrayed by company co-founder Marie Mullen who also plays a distraught Queen Margaret.


As the other women wronged by Richard, Jane Brennan makes a dignified Queen Elizabeth, wife of Richard’s brother King Edward IV (Bosco Hogan) whose young sons Richard will have murdered in the Tower, Ingrid Caigle as Richard's mother, the Duchess of York, who rues the day she bore him, and Cullen as the widowed Lady Anne whose husband and father-in-law he murdered.


Hynes provides plenty of high drama. Richard’s wooing of the widowed Anne, for one, is superbly staged and played, as are the scenes of Richard manipulating his victims before they meet their untimely ends: Clarence (Marty Rea), Hastings (Garrett Lombard), and Buckingham (Rory Nolan), the last Richard’s staunchest ally and then, when he hesitates to kill the young princes in the Tower, frozen out of Richard’s good graces.


Francis O’Connor’s predominantly grey walled set, its austerity broken on occasion by a brightly lit backdrop as characters made their entrances, and a skull in a glass box which hangs ominously over the stage, representing the fallen (great moment when Richard snatches a crown from the skull), and the multi-purpose aforementioned trap door all make for a versatile playing area. Costumes are beautifully period.


Gripping theater, its three hours fly by swiftly. This is one of the gems of this year’s White Light Festival, and as such, highly recommended.