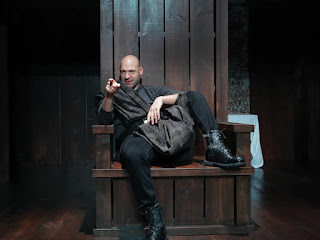 John Doyle’s pocket-sized production of Shakespeare’s shortest tragedy has the virtue of welcome brevity, if not greater emotional depth. But the action passes quickly in its one hour and 40 minutes running time.

There are only nine actors, most playing multiple roles, and the production is strikingly staged in an intriguingly ritualistic manner. The witches who open the play are embodied by eight of the cast, rather like the concerted witches in Verdi’s opera, recently on view at the Met. Interesting as this approach is, what pulls the production down are the performances which, for the most part, are earnest but unexceptional.

With such a small company, this is perforce, as you might expect, a color- and gender-blind production starting with Mary Beth Piel’s assumption of King Duncan. (If Glenda Jackson can play Lear, well why not?) Actually, Piel is arguably the most accomplished and satisfying player, even when, after Duncan’s murder, she returns as part of the ensemble and the Old Woman speaking of Lady Macbeth’s sleepwalking antics.

But for the rest, the so-so level of performance puts one nostalgically in mind of so many other truly great stage productions and films that there is an inevitable feeling of letdown. I think of recent local mountings with Patrick Stewart and Kenneth Branagh respectively, to name but two.

Here, as the increasingly murderous Macbeth, Corey Stoll -- who has impressed with his performances at Shakespeare in the Park (Iago, Brutus, etc.) -- fails to mine the depths of the role, though he speaks the text intelligently enough, albeit in the prosaic American accent used by the whole cast. His real-life wife, Nadia Bower’s Lady Macbeth is glamorous but her line readings are strictly standard issue. Erik Lochtefeld’s Banquo and Barzin Akhavan’s Macduff are decent.

N’jameh Camara has some scene stealing histrionic moment as Lady Macduff, first as she bemoans her husband’s flight to England, leaving her and their children alone, and then experiencing her brutal murder at the hands of Macbeth himself, the latter an interesting Doyle innovation.

The report of Macduff’s family’s killing is reported by Barbara Walsh’s otherwise OK Ross with odd placidity, and it takes a while for Macduff to work up to the expected emotional pitch. Raffi Barsoumian’s Malcolm has the requisite authority, though the scene where Macduff and Malcolm bemoan the fate of Scotland is rather sluggish.

Doyle's minimalist approach has meant some trimming of the text, and excision of characters like the Porter altogether.

All the expected big moments play out less grippingly than expected, be it the aforementioned scene of Macduff learning his family has been slaughtered to Lady M’s sleepwalking scene to Macbeth’s fear of the approach of Birnam Wood coming to Dunsinane. In that last, Stoll registers as mostly petulant. And his “tomorrow and tomorrow and tomorrow” speech is flatly delivered. Macbeth’s horror at spying Banquo’s ghost during the banquet scene elicited titters from the audience, one of several such unintended moments.

Doyle’s economic staging had the banquet scene follow directly upon Banquo’s murder. So Banquo is able to rise up almost immediately from the floor as a ghost.

The action plays out on Doyle’s design the rectangular wooden thrust space of the CSC, with a throne, banquet table, balcony upstage, and the theater’s aisles. There are three wooden benches that are carted around by the cast periodically. Solomon Weisbard designed the effective lighting. Ann Hould-Ward’s costumes are appropriately somber, though there’s a surfeit of tartan capes with which everyone rather distractingly fusses. Matt Stine is responsible for the atmospheric sound design.

Far more interesting, on the whole, than “Macbeth” at the Sunday matinee I attended was the post-show talkback with Doyle and great British director Phyllida Lloyd, ostensibly to talk about women in Shakespeare, but in fact, topics varied. Along the way, it was pointed out that Americans believe in “heritage Shakespeare” --  with traditional English accents -- with Doyle making the case that Elizabethan English was more akin to present-day American. That may be so, but true or not, I can't help believing the text does suffer when delivered in such a routine manner.

Photo by Joan Marcus.
Print this post
Posted by Harry Forbes at 11:04 AM