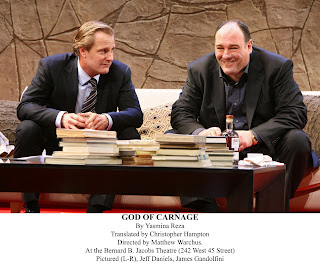 After the hilarious trilogy, "The Norman Conquests," Matthew Warchus further demonstrates his comic mastery with a wickedly funny, crowd-pleasing new comedy by French playwright Yasmina Reza, translated by Christopher Hampton. The plot concerns two couples who meet to arbitrate a schoolyard altercation involving their respective boys -- one knocked out a couple of the other's teeth -- and before long, the civilized peace negotiations of the parents turn psychologically and physically acrimonious.

As with "The Norman Conquests," there's a serious subtext, this time nothing less than "might vs. right" on a global scale -- but James Gandolfini (yes, Tony Soprano) as a hardware salesman, Marcia Gay Harden as his socially conscious author-wife, Jeff Daniels as a smarmy lawyer defending a questionable pharmaceutical company while glued to his cell phone, and Hope Davis as his deceptively mild-mannered wife are splendid negotiating the mood shifts.

The play often resembles "Who's Afraid of Virginia Woolf" in its escalating, alcohol-fueled rancor, and be warned, much like Honey in that Edward Albee play, Davis' character has a propensity to vomit, and in quite spectacular fashion. You'll wonder how the effect was achieved.

The action has been shifted from Paris to Brooklyn and the French names Anglicized. But it works, and whether or not you think the play is indeed a metaphor for the decline of Western civilization, it's mightily entertaining on the surface.