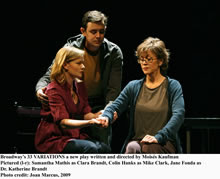 What was Beethoven's fascination with a mundane tune from which he derived his "The 33 Variations on a Waltz by Anton Diabelli," a music publisher? The answer to that question intrigues musicologist Katherine, played by Jane Fonda in a confident return to the stage. Katherine is determined to discover the answer, but the clock is ticking as her body is rapidly starting to fail as Lou Gehrig's disease takes its atrophying toll.

Despite her frail health, Katherine heads for the Beethoven archives in Bonn, Germany, and bonds with the initially forbidding but ultimately good-hearted overseer Gertrude, played appealingly by Susan Kellermann. And she also mends her fractious relationship with her daughter, Clara (Samantha Mathis), who has become involved with her mother's male nurse, Mike (Colin Hanks).

Nineteeth-century flashbacks of the increasingly deaf Beethoven (Zach Grenier) and his circle are interwoven with the modern story, while the variations themselves are played deftly by musical director Diane Walsh.

Moises Kaufman's play is a poor cousin of "Amadeus," which it sometimes seems to resemble in the Beethoven scenes, and Katherine's decline, though well-limned, is somewhat tedious.

The evening indeed plays out in 33 scenes, and truthfully, you may find yourself counting down the final variations, though Kaufman himself directs with skill, and the interweaving of the modern story and the historic narrative is smoothly executed.