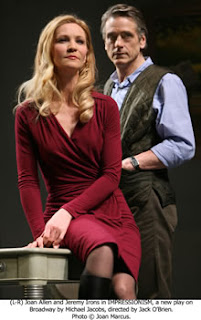 The stage appearances of Jeremy Irons and Joan Allen are all too few, which makes it all the more surprising that the vehicle chosen for their Broadway comeback is this nice, but inconsequential, trifle.

In Michael Jacobs' midlife romantic comedy, Allen plays Katherine, a gallery owner, paradoxically reluctant to part with any of the artworks which adorn the walls. Irons is a world-weary photojournalist who works for her in the store.

Through several flashbacks, thematically tied to the paintings on the gallery walls, we observe pivotal psyche-damaging episodes from their respective pasts, such as Katherine's father walking out on her mother, and Thomas (Irons) losing the child to whom he had become attached in Africa.

Ace director Jack O'Brien moves things fluidly, and Elaine J. McCarthy's physical production is classy with an understatement that matches the play's low-energy vibe. There's good work from the supporting cast, which includes veteran Andre De Shields in a couple of scene-stealing roles, and Marsha Mason as a gregarious matron.

The thematic parallels between the titular art movement and life -- e.g., how you have to stand at a distance to see things clearly -- are terribly forced.

The final scene where Katherine and Thomas finally bond romantically is charmingly played, but the events that lead up to it are didactic and obvious. (Gerald Schoenfeld Theatre, 236 W. 45 St.; (212) 239-6200 or www.telecharge.com) Print this post
Posted by Harry Forbes at 2:32 PM