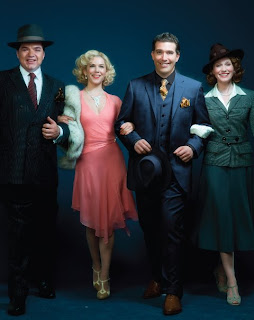 You can't go wrong with "Guys and Dolls," Frank Loesser's delightful paean to writer Damon Runyun's colorful confluence of Broadway sinners and saints -- well, gamblers and Salvation Army officers. Or so you would think.

The 1992 production with Nathan Lane is still fondly remembered, and the recent London revival with Ewan McGregor was also terrific. When plans to bring that production to New York fizzled, the field was open for this one, and it's mightily disappointing.

Though no expense has been spared, with state-of-the-art digital projections, and gigantic neon signs, something is seriously amiss.

Craig Bierko comes off best as ace gambler Sky Masterson, though he doesn't entirely avoid blandness. But Kate Jennings Grant shows more toughness than vulnerability as Sarah Brown, and Lauren Graham is a strictly by-the-numbers Miss Adelaide, the psychosomatically flu-ridden fiancee of Nathan Detroit, "good old reliable" floating crap game arranger. Oliver Pratt, fine dramatic actor that he is, is out of his depth as Detroit.
The cast needn't be carbon copies of memorable creators, but for the most part everyone seems perversely miscast.

And there's chilliness about Des McAnuff's multitiered production, beyond its reliance on those flashy digital projections. Steve Canyon Kennedy's sound design is beautifully clear, but gives everyone a flat homogeneity, further distancing the audience.