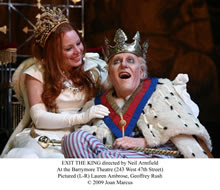 Absurdist theater, like mime, may not be to every taste. In fact, one nationally known critic was heard pronouncing something unprintable as he hastily exited Eugene Ionesco's 1962 tragicomedy at intermission.
But there's no denying that Geoffrey Rush -- Oscar winner for 1996's "Shine" -- gives a grand, multifaceted performance as a worldly, despotic and narcissistic king whose chaotic mythical kingdom is in ruins, and who is only willing to admit he's dying at nearly the end of the play's two hours. This highly stylized production includes much comic cavorting which Rush executes with impressive panache, but these antics only momentarily distract from the tragic whole. Rush's wandering up the theater aisle pathetically imploring the audience to show him the way to die is an especially poignant sequence.
The well-cast ensemble includes Susan Sarandon as his sardonic first wife, Queen Marguerite, urging the king to his inevitable death; Andrea Martin as the wacky palace maid Juliette; Lauren Ambrose as the emotionally raw Queen Marie; William Sadler as the blithely hard-nosed doctor; and Brian Hutchison as the loyal armored guard. Ionesco (here adapted by director Neil Armfield and Rush) delineates the death experience with stunning vividness.
God is not part of the existential proceedings here, but never have the sense of our fragile earthly nature and the futility of amassing worldly possessions and power been so strikingly conveyed.
Armfield's mounting received great acclaim in an Australian revival with Rush in 2007, and merits its restaging here. There is some rough language throughout -- and despite the comic, almost vaudevillian shtick that liberally peppers the evening -- the gravity of the death experience makes this specialized adult fare.
(Ethel Barrymore Theatre, 243 W. 47th St.; (212) 239-6200 or www.telecharge.com)
Print this post
Posted by Harry Forbes at 8:18 AM