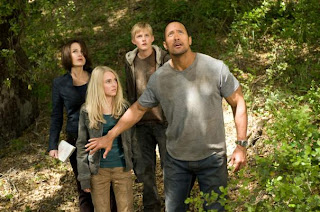 Devotees of the 1970s franchise "Escape to Witch Mountain" and its sequel "Return from Witch Mountain" should be pleased with director Andy Fickman's engaging remake, "Race to Witch Mountain" (Disney), which pays loving homage to those earlier films, and with the added gloss of some 21st-century technology it promises to win a new generation of fans, too.

This version of the sci-fi adventure centers on Las Vegas cab driver Jack Bruno (Dwayne Johnson), an ex-con whose grand-theft-auto days are behind him. Early on, he gives a lift to Alex Friedman (Carla Gugino), an astrophysicist discredited for espousing her theories on extraterrestrial activity who's there to lecture at a UFO convention.

When two self-assured young teens, Sara (AnnaSophia Robb) and Seth (Alexander Ludwig), materialize in his cab, and ask to be taken to a remote location, it's not long before Jack learns they are, in fact, aliens. Their mission, inherited from their parents, is to make their dying planet habitable again in time to head off an invasion of earth by militant factions there.

The skeptical Jack is convinced their story is real when Sara demonstrates her telepathic and telekinetic skills and her brother his adeptness at changing his body density (i.e., walking through solid objects). As the group -- soon joined by Alex, to whom Jack turns for help -- attempts to find the kids' spaceship, they are pursued by a humanoid monster called the Siphon, a team of federal UFO investigators headed by Burke (Ciaran Hinds in serious villain mode), and the goons who work for Jack's former mobster boss.

Things get even dicier when they discover the spaceship has been impounded in a top-secret government facility at the titular Witch Mountain.

Fickman's reimagining moves at a fast clip with extremely likable lead performances and more elaborate special effects than were, of course, possible in the original. There are plentiful references to the earlier films in Matt Lopez and Mark Bomback's script, most significantly, appearances by original child stars Ike Eissinmann and Kim Richards (Tony and Tia, respectively, from the '70s films) who show up in cute cameo roles. He's a local sheriff who momentarily stops the feds, and she's a good-hearted waitress who helps Jack and the kids make an escape.

There are some very funny jibes at UFO conventions, with Garry Marshall a standout as an eccentric UFO expert.

In the course of the story, the doubting Seth learns that humans can be trusted after all. Jack, of course, finds redemption in selflessly helping the kids, even at the risk of landing back in jail. Early on, the telepathic Sara had compassionately remarked of Jack, whose self-esteem is at rock-bottom, "So large outside, so small inside." This being a Disney film, there's even redemption of another sort for a vicious mutt the group picks up along the way. Print this post
Posted by Harry Forbes at 2:13 PM