The Bacchae (The Public Theater/Shakespeare in the Park) 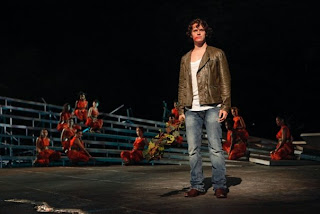 If you’re perhaps thinking of skipping the Public’s rare foray into Greek tragedy, dismissing it as a worthily academic but dullish comedown from the starry and crowd-pleasing “Twelfth Night” last month, you’ll be missing a riveting theatrical experience. There’s nothing musty about Joanne Akalaitis’s vibrant and strikingly designed take on Eurpides’ great tragedy.

As the wandering Dionysus – offspring of Zeus and the mortal Semele – Jonathan Groff, currently making his screen debut in Ang Lee’s “Taking Woodstock,” could be playing a scruffy rock star with his curly locks, torn jeans and leather jacket, not to mention occasional vocalizing.

That metaphor works well enough as the plot concerns Dionysus disguising himself as a mortal and trying to convince the people of Thebes of his divinity, his strategy to target the city’s women who are held in idolatrous thrall. Thebes is governed by his cousin Pentheus (played stolidly by Anthony Mackie of “The Hurt Locker”).

Groff, who is to be commended for making intelligent career choices, indeed radiates star quality and delivers his lines with intelligence, though even given the concept, seems a tad lightweight, especially compared with his more seasoned colleagues.

Andre De Shields is blind soothsayer Teiresias and George Bartenieff is Dionysus’ and Pentheus’ grandfather, both of whom vainly try to tamp Pentheus’ arrogant antagonism. They offer solid support as do the others.

Rocco Sisto is especially outstanding as the Messenger whose long speech describing Dionysus’ vengeance on Pentheus is the most riveting and classically well-spoken of the evening. Kudos, too, to Joan MacIntosh as Agave, Pentheus’ mother who falls under Dionysus’ spell with horrifying results. She rises to her big moment with aplomb.

Philip Glass has composed a wonderfully apt and -- like Nicholas Rudall’s translation – highly accessible score for this chorus of Bacchants, and David Neumann has given them exquisite choreography creating striking stage pictures on the sloping, curved bleachers that are the centerpiece of John Conklin’s set. The conflict between the traditional order and strictures of conventional society and the frenzied anarchy of the Bacchae at the heart of Euripides’ themes is vividly contrasted.

Shakespeare in the Park at the Delacorte Theater
Through Aug. 30.
www.publictheater.rog Print this post
Posted by Harry Forbes at 8:37 AM