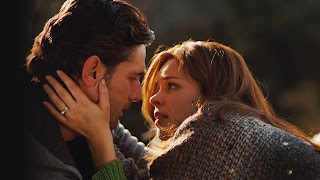 A chick flick for sure, but a pretty good one, this adaptation of Audrey Niffenegger’s 2003 best-seller about a man born with the unfortunate condition of being shuttled back and forth through time, seems calculated to push all the right buttons of any romantic-minded gal: a lonely child who grows up to marry the man of her dreams, a hunky and oh-so-sensitive guy who cooks and pines for his (departed) mother, and a penchant for shedding his clothes every 10 minutes or so.

In the opening scene, young Henry (Alex Ferris) loses his beloved opera-singing mother in a horrific car crash, but moments later, finds himself comforted by his older self (Eric Bana). The latter assures the boy he’ll eventually be OK, and informs him of his supernatural gift for time travel. It was this that saved young Henry from perishing with his mother.

Years later, Henry is a rare-book librarian in Chicago, and Clare (Rachel McAdams), a bright-eyed young artist, asks for him, and to Henry’s befuddlement, gushingly informs him they have known each other for years. As she seems to know of Henry’s special powers, he instinctively trusts her and accepts her invitation to lunch.

It turns out that as a privileged girl of six (Brooklynn Proulx) picnicking by herself in a meadow she had been frequently visited by an older Henry, and he had become her best friend.

Now age appropriate for each other, they fall in love and marry, over the objections of Clare’s friends Gomez (Ron Livingston) and wife Charisse (Jane McLean) who feel Henry’s unusual affliction might be a small hindrance to the union, especially as Henry never knows when he’s going disappear leaving only his rumpled clothes behind, and emerge in another time and location, past or future, where he must quickly scramble for new attire. Henry, in fact, evaporates just before their wedding, but a grey-haired version of him appears just in time to tie the knot.

Before long, Henry’s vanishing act comes to annoy Clare, who petulantly grumbles at one point that he has missed Christmas and New Year’s – which seems rather uncharitable since she knows he can’t help it – but her ill temper subsides when his prescient powers allow him to win the lottery. With their winnings, they move into a spacious house with an adjoining garage she can use as a studio.

All is not perfect, however, as her pregnancies always end in miscarriage, as it seems the fetus is always afflicted by the same time-traveling gene and leaves the womb. There are, as well, further ominous forebodings about the future.

Versatile Eric Bana, currently playing a quite different sort of role as Leslie Mann’s philandering husband in “Funny People,” makes a stalwart hero, and he and McAdams are photographed by Florian Ballhaus in loving close-up for most of the film. To the pair’s credit, they play the improbable happenings absolutely straight, and thanks to them, the film is ultimately affecting.

Director Robert Schwentke sustains the requisite romantic mood, and keeps matters from becoming too treacly. Bruce Joel Rubin’s script tells the complex story better than most, but even so, get ready for major suspension of disbelief.

Husbands and boyfriends who go along for the ride may be intrigued by the sci-fi aspects of the plot, but this glossy romance will appeal most to its target audience.

The film has been rated PG-13 by the MPAA for thematic elements, brief disturbing images, nudity and sexuality. Print this post
Posted by Harry Forbes at 6:54 AM