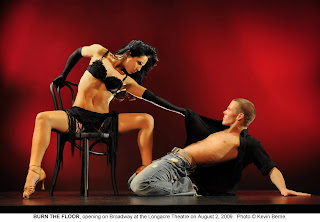 If the title rings a bell, you may be recalling the PBS pledge special that aired back in 1999 or the show’s brief run at Radio City Music Hall the following year. The latest incarnation of the production, which has since toured the world much like the “Riverdance” franchise, has come to Broadway for a limited 12-week engagement and scarcely betrays its longevity.

Exhilarating, if more than a tad enervating, the company of 18 goes through a fairly seamless succession of extremely sexy strutting and hard-driving dances of the Latin and Ballroom brand, with only a few respites for more lyrical fare like the waltz. But there are Foxtrots, Lindys, Cha-Chas, Tangos, and more. The guys are often shirtless, the gals provocatively gowned.

Like the largely canned soundtrack accompanying the four live musicians – two on percussion (conductor Henry Soriano and Roger Quitero), Earl Maneein on violin and guitar, and David Mann on saxophone – the production overall has a synthetic quality.

But the dancers themselves – hailing from Russia, Germany, Great Britain, Australia, and elsewhere -- are vividly real, and in fact, pretty darned sensational, executing intricate balletic moves and muscular aerobic movements with razor-sharp precision. For the first three weeks of the run, the company is joined by Maksim Chmerkovskiy and Karina Smirnoff from “Dancing with the Stars.” Vocalists Ricky Rojas and Rebecca Tapia share vocal chores.

To a soundtrack more poundingly percussive than dreamily mellow, the first act builds to a dazzling Swing-dominated climax to the 40’s rhythms of “Sway.” Truthfully, the shorter second act feels anti-climactic, though it, too, ends rousingly with a hard-driving “Proud Mary,” with all the ladies shimmying in modified Tina Turner fringed mini-dresses.

This high-concept show – directed and choreographed by creator Australian Jason Gilkison – whips the audience into quite a frenzy. The company really deserves its standing ovation, and you’ll be left pondering how they can keep up the pace for 12 days, much less 12 weeks!