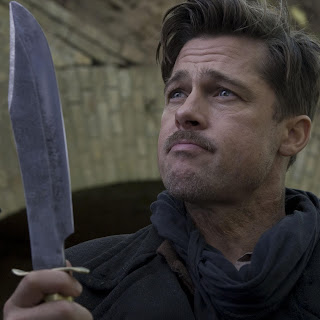 Here, three stories are woven together: an American lieutenant Aldo Raine, played by Brad Pitt with a Clark Gable mustache and a Tennessee drawl, commands a small band of Jewish-American soldiers to revenge themselves on the Nazis. (If you’re squeamish, be warned: their victims are scalped, and when they’re permitted to live, they’re branded on their foreheads with a swastika).

Then there’s the glamorous German actress Bridget von Hammersmark (Diane Kruger) who joins Raine’s band and some British intelligence officers in a plot to topple Adolf Hitler and his cronies.

These strands converge in a bravura sequence involving the gala premiere of a Joseph Goebbels propaganda film – attended by the Fuhrer himself -- held (where else?) at Shosanna’s cinema.

From the audaciously long opening scene where Landa confronts a rough-hewn farmer and his three beauteous daughters in a deadly verbal game of cat-and-mouse, a sequence which might have come from a Sergio Leone Western, Tarantino is in full command of his filmic vocabulary, gleefully bending genres. Similarly, later in the film, a deadly standoff in a basement bar could easily be set in a Western saloon.

For all the lengthy and violent action sequences, Tarantino’s script is literate, richly textured and, often witty, making this arguably the most entertaining grand scale Nazi action caper since Paul Verhoeven’s “Black Book” in 2006. It shares with that film striking period settings, crisp color cinematography, and richly entertaining performances across the board (including a surprisingly effective cameo by Mike Myers as a British general).

And for a film involving a plot against Hitler, this one has an edge over the Tom Cruise “Valkyrie” film as you have a sense that in Tarantino’s fictional world, there’s the possibility that anything might happen.

Along with the key movie theater setting, and subtle cinematic allusions along the way, film buffs will relish the overt references to German film studio UFA, greats G.W. Pabst and Emil Jannings. There’s also a handsome German war hero (Daniel Bruhl) who is hired to play himself in a propaganda film about his exploits and who develops a puppy-dog crush on Shosanna who rebuffs him. And English officer Archie Hicox (Michael Fassbender) is, he tells us, a film critic in civilian life.

The film has long sequences in German and French with subtitles.

(The film is rated R by the MPAA for strong graphic violence, language and brief sexuality.) Print this post
Posted by Harry Forbes at 5:21 AM