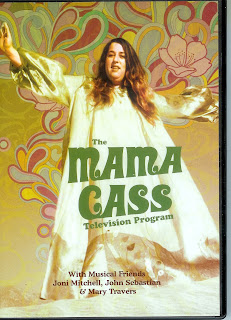 Its release timed to coincide with the hoopla surrounding the 40th anniversary of the Woodstock, this ABC-TV special – apparently intended as a pilot for a projected series with the late singer – dates, like the music festival, from 1969.

Mitchell sings her iconic “Both Sides Now” definitively, Travers does a lively version of “And When I Die,” and the three ladies blend beautifully on “I Shall Be Released.” Sebastian solos with “She’s a Lady” followed by a duet with Cass.

Less elevated (though high on the camp level) is a production number with Cass joining Hackett, Landau, and Bain for the song “Meeskite” from “Cabaret.” The game foursome also do a so-so skit about four lonely people looking for love.

The hour – which, incidentally, includes the original commercials (catch Bernadette Peters in one for Playtex) – ends with a Cass mini-concert. Despite her girth, she does some amazingly spry footwork to “Dancing in the Streets,” and concludes with a lovely version of the standard, “I Can Dream, Can’t I?”

Cass would die five years later of heart failure in London at the age of 32.

She makes a remarkably assured host on the special, but projects even more authority in the bonus clip of a duet with Sammy Davis, Jr. There’s also a present-day interview with Sebastian reminiscing about their longtime friendship.

For all its quirkiness, this special is a bittersweet reminder of a talent taken too soon. Print this post
Posted by Harry Forbes at 7:19 AM