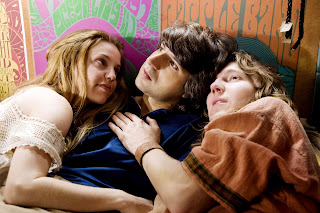 This is a pointedly laid-back change of pace for filmmaker Ang Lee, particularly after the heated passions of “Lust, Caution.” Opening today in New York and Los Angeles to coincide with the 40th anniversary of the Woodstock Music and Arts Festival, “Taking Woodstock” covers the story behind 1969’s iconic three-day event in a heretofore sleepy upstate New York town.

There’s nothing of the concert itself here, but instead, James Schamus’ script focuses on the role played by Elliot Tiber (played with low-key vulnerability by Demetri Martin, a young actor known for his Comedy Central series, here making his feature film starring debut), in facilitating the event. He was the son of the owners of a seedy El Monaco motel, and youngest head of the White Lake Chamber of Commerce. His parents’ mortgage payments are deeply in arrears, and he’s come home from New York City to help stave off the bank. His parents Jake and Sonia Teichberg – Jewish immigrants -- are played by Brits Henry Goodman and Imelda Staunton.

When the nearby town of Wallkill withdraws the permit for the planned festival, Elliot, suggests White Lakes as a perfect alternative.

Max (Eugene Levy), a prosperous dairy farmer, offers his property to the planners including producer Michael Lang. (The incongruous businessman-hippie is played sweetly by Broadway’s Jonathan Groff in a promising movie debut.) After some financial haggling – his initial $5,000 asking price morphs to $75,000 -- it’s a done deal.

The townspeople are up in arms about “hippies” invading their bucolic surroundings, and anti-Semitic slurs are spray-painted on the motel property, but these blips aside, the event goes on to become a transformative cultural phenomenon, despite heat, rain, and traffic congestion.

Along the way, Eliot – like many of the other characters in the film – does some transforming himself: becoming comfortable with his homosexuality with an affair with a one of the concert workers. He also has his first acid trip with a couple of laid-back hippies, and ultimately comes of age.

The pace is leisurely, particularly at the start as Lee – and scriptwriter James Schamus – accentuates the sleepy nature of the little town. Though the recreation of this singularly hopeful time is impeccable in surface detail, it does feel a bit staged.

Performances are all on target, and Schreiber is a hoot, though Staunton comes close to caricature in her harridan role. There are no such quibbles about Goodman, however, whose own transformation and unlikely camaraderie with Vilma are nicely conveyed. Martin is appropriately nebbishy, and generally likeable.

Lee uses split screen device paying homage to the 1970 documentary “Woodstock.” The script was adapted from Tiber’s memoir “Taking Woodstock: A True Story of a Riot, A Concert, and a Life.”

For all the period trappings and meticulous 60's recreation, and despite the generally appealing performances, the film registers, at best, as mildly pleasant.

(The MPAA has rated the film R for graphic nudity, some sexual content, drug use and language.) Print this post
Posted by Harry Forbes at 7:42 AM