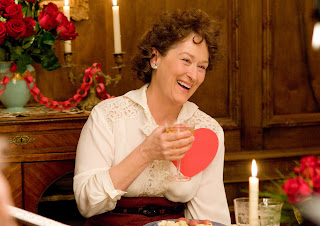 The script was based on the memoirs “Julie & Julia” by Powell and “My Life in France” by Child with Alex Prud’homme.

In one story, it’s 2002, and struggling writer Julie is working for the Lower Manhattan Development Corporation (devoted to rebuilding the World Trade Center), taking wearying calls from 9/11 victims who vent their understandable frustrations on her.

In vain, she tries to convince them she’s not the enemy, but the emotional strain is taking its toll. About to turn 30, she decides to give her life purpose by recreating all the recipes from her idol Child’s trend-setting cookbook, “Mastering the Art of French Cooking” within a calendar year. (Ephron’s script has established that cooking provides a welcome respite from her workday frustrations.)

The Julie story alternates with scenes from Julia’s days in late 1940s Paris when she and her foreign-service employee husband Paul Child (Stanley Tucci) came to live there. Streep is cleverly costumed and photographed to appear quite convincingly as tall as 6’2” Julia.

Giddy and gregarious, Julia tries her hand at hat-making and bridge before settling on the notion of taking her appreciation for food -- “French people eat French food every day. I can’t get over it,” she effuses early on -- into a more serious realm and enrolling at famed Le Cordon Bleu cooking school.

To the chagrin of Madame Brassart (Joan Juliet Buck) the chilly director there, Julia soon outshines the male students and later joins with two French ladies Louise Bertholle (Helen Carey) and Simone Beck (Linda Emond) in teaching French cooking to American expatriate women. Bertholle and Beck have begun collaborating on an English-language cookbook, but they eventually entreat Julia to join them.

Meanwhile, Julie’s blog grows in popularity, and a few misfires notwithstanding, she triumphs over her own inhibitions, overcoming her phobia by eating her first egg and killing live lobsters. But her obsession begins finally to strain her marriage, indulgent though Eric had been till then.

The two plot strands thus carry a similar dramatic arc, the ladies’ creative growth, the common passion for food, and Julie and Julia’s respective close marriages observed in sensible counterpoint. The film is as much about marriage as it is food.

The love story of Julia and Paul is particularly touching, with each warmly supportive of the other. Paul seems in the position of having to show the lions share of tolerance, but Julia shows her accommodating mettle when Paul is recalled to Washington at the height of the McCarthy era.

Skip the popcorn for this one, and save your appetite for the nice gourmet meal you’ll surely crave afterwards.

(Rated PG-13 by the Motion Picture Association of America for Brief Strong Language and Some Sensuality.) Print this post
Posted by Harry Forbes at 8:42 AM