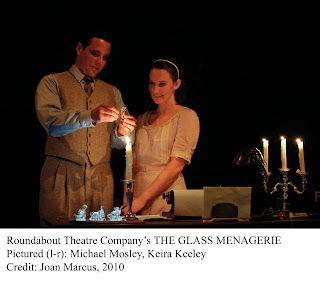 Four accomplished actors are undercut by a concept that is sporadically revelatory but, in most other respects, out of step with Tennessee Williams’ oft-performed truth versus illusion masterpiece, ‘The Glass Menagerie,” the 1944 work which put him on the map.

Director Gordon Edelstein has taken the play’s semi-autobiographical aspects rather too literally. Narrator Tom Wingfield is now not a merchant seaman recollecting the events of ten years earlier, but a paunchy, alcoholic Williams-like writer in a bleak hotel room, tapping out the play.

Eventually, though with no additional furniture or trappings, the spare room takes on the guise of the shabby St. Louis tenement he shared with Amanda, his delusional, former Southern belle mother, and Laura, his painfully shy, crippled sister.

As they make their first appearances, in fact, Tom simultaneously speaks their dialogue as he writes. Sometimes, distractingly, given the lack of the fire escape specified in Williams’ stage directions, Tom stands to the side of the room observing the action while continuing to write.

The bleakness of the hotel room (minimalist set by Michael Yeargan) thus permeates the Wingfield home, too, and together with the absence of musical underscoring, makes for an especially austere telling. Jennifer Tipton’s lighting is naturalistically dim, and the power outage just before “gentleman caller” Jim O’Connor and Laura’s extended scene plunges the stage into total darkness, daringly lit only by candles.

Tom is presented as a repressed homosexual, a conceit which would seem to render Tom’s speeches about his nightly forays to the “movies” as merely euphemistic.

It’s an interesting interpretation, to be sure, and Patch Darragh plays it adeptly, but not, I believe, one intended by Williams even if, hypothetically, he had written the play a couple of permissive decades later.

Keira Keeley is generally sympathetic as the disabled Laura’s, but rather overdoes the limp and shyness aspects.

Ivey’s frowzy, nag of a mother is a finely detailed portrayal upon which she has lavished all of her actorly prowess. Much of what she accomplishes is impressive, if sometimes – as in the dinner scene – she fails to suggest an innate gentility. Overall, she brings a healthy dose of pragmatism to her portrayal, but loses something of the touching radiance that originator Laurette Taylor to said to have conveyed.

Given the doubling of furniture, Laura’s titular collection of glass animals is positioned precariously on Tom’s hotel writing desk which, small point or not, seems wrong.

Edelstein’s pacing of this production, first mounted at Long Wharf Theatre in May of last year, results in some awfully slow stretches, but he must be credited with drawing good work from his cast.

Despite all the false notes sounded in this high-concept “Glass Menagerie,” the performances are never less than compelling.

(The Laura Pels Theatre at the Harold and Miriam Steinberg Center for Theatre, 111 West 46th Street, 212-719-1300 or www.roundabouttheatre.org) Print this post
Posted by Harry Forbes at 5:10 AM