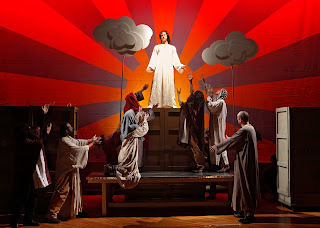 It’s closing on Friday, so you’ll have to hurry, but the Epic Theatre Ensemble‘s production of Sarah Ruhl’s epic trilogy about the mounting of the biblical Passion Play in, respectively, anti-Catholic Elizabethan England, Nazi-era Bavaria (in Oberammergau) where the play’s inherent anti-Semitism fed the existing climate, and 1960’s Spearfish South Dakota – and the intersection of art, religion, and politics -- is one of the major events of the season.

After productions at the Yale Repertory Theatre and the Goodman Theatre, this is the first mounting in New York, and it’s superbly staged by Mark Wing-Davey.

There’s no denying that at three and one half hours plus, the three-act play does feel its length, but theatergoers will be rewarded with imaginative stagecraft, a superlative cast, and an absorbing narrative. (During intermission, bagels and little thimbles of wine (or grape juice) are freely distributed.

Though their biblical parts remain more or less the same in each era – Hale Appleman is Jesus and Dominic Fumusa is Pilate in each act, for instance – the characters playing them are different. Thus, Fumusa and Appleman are rivals for the Mary actress (Kate Turnbull) in the first and third acts, and clandestine gay lovers in the second.

There are a couple of especially powerful scenes, as when a young Jewish woman (Noonan) pleads not to be taken off to (presumably) a concentration camp in the second act, and when a Vietnam vet (Fumusa) recalls his harrowing war experiences.

Allen Moyer and Warren Karp panoramic setting, as lighted by David Weiner makes ingenious use of the long playing area. The periodic motif of a procession of giant translucent fish – that most powerful of early Christian symbols – traversing the stage is most striking.

Music is most effectively employed too, some of it by David Van Tieghem.