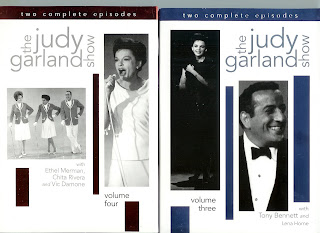 Judy Garland would surely be pleased that her CBS television series (1963-64) – the cancellation of which, after a losing ratings battle with NBC’s “Bonanza,” mightily distressed her – is now enjoying its second DVD issue, looking as sharp and clear as if it were done yesterday, apart from being shot in black-and-white.

Volume 3 is of particular current interest in that one of its two episodes is the show she did with the late Lena Horne, along with Terry-Thomas. That show is paired with the Tony Bennett/Dick Shawn episode.

Garland herself looks great in both episodes, trim, stylishly attired and with a becoming coif. As was sometimes the case, though, she a bit less on top of her game than her lustrous co-stars, singing strongly but muffing lyrics, and looking occasionally at sea in the medleys.

Still, she delivers a heartfelt version of Noel Coward’s “If Love Were All” at the opening, and a really sensational “Stormy Weather” on the Bennett show, while in between, pairing surprisingly well with comedian Shawn for “My Buddy.” Her “Day In, Day Out” duet with Horne shows her in fine voice, though Horne trumps her in the extended medley of each performing the other’s hits.

Horne actually looks rather fierce throughout the hour, but seems to enjoy the reunion with her former MGM colleague. Though racial mores of the time discouraged interracial contact between performers of the opposite sex – Petula Clark’s mere touching of Harry Belafonte’s arm a few years later caused a firestorm – but Horne and Garland embrace frequently here with no repercussions.

Noel Coward’s “Mad Dogs and Englishman” (with Thomas) doesn’t quite come off, largely due to Garland’s tentative contribution, but elsewhere, she gets to recount her oft-told but very funny anecdote about the betrayal of a British journalist.

For Garland watchers, Vol. 4 shows the lady closest to peak, confident form. She teams with Broadway legend Ethel Merman in the first show and their duets show both ladies on equal footing.

Venturing away from her familiar repertoire, Garland sings a simple version of “Shenandoah” arrestingly shot as she stands next to a barrel in a Western setting, and does a full-out dance number with guest Peter Gennaro. The closing “Trunk” segment has her doing a well-sung “Pretty Girl Milking Her Cow” and a stirring “Battle Hymn of the Republic,” recorded in the wake of John F. Kennedy’s assassination.

The other episode on Vol. 4 pairs the star with Vic Damone and Chita Rivera. Garland and Damone do an extended “West Side Story” medley, both in excellent voice, albeit prerecorded. Garland’s lip-syncing is not at her best here, but it barely mars the whole. She and Rivera – sporting a not terribly becoming beehive hairdo – sing “I Believe in You” to Louis Nye. Rivera dances in a so-so production number built around “I Got Plenty of Nothin.’”

Garland really shines in a particularly vibrant “By Myself” and concludes with firm-voiced versions of “Better Luck Next Time” from “Easter Parade” and her medley of “Almost Like Being in Love” and “This Can’t Be Love,” done even better than at her famous Carnegie Hall concert.

As noted, the print quality on these Infinity issues is superb, but it’s a pity that the indexing isn’t anywhere near as comprehensive, in terms of number of chapter stops, or informed as the previous issue on Pioneer. Tony Bennett’s rendering of the classic tune “True Blue Lou” comes up on the menu as “True Blue Moon.” The multi-song “West Side Story” medley is simply titled “Maria.” And the aforementioned knockout version of “Stormy Weather” is awkwardly dubbed “Don’t Know Why There’s No Sun Up in the Sky.”