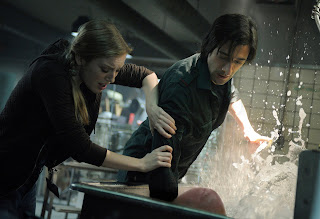 Hollywood has shown us time and again that it’s not nice to mess with Mother Nature, as Clive and Elsa (Adrien Brody and Sarah Polley), genetic researchers for a pharmaceutical company N.E.R.D. learn here when they secretly mix animal and human DNA, and come up with a strange female creature they attempt to raise on their own.

An earlier experiment resulting in more rudimentary blob-like creatures named “Fred” and “Ginger” gives their financially-strapped company hope that the synthesized protein which they hope to mine is within their grasp. Clive and Elsa are ordered to ditch the research, and move immediately into the production phase, prompting them to continue their hybrid experiment in secrecy.

Brody and Polley are appealing, first-rate actors, so their presence alone raises the bar of this familiar story. Furthermore, the script (co-written by director Vincenzo Natali, along with Antoinette Terry Bryant and Doug Taylor) gives a novel twist to this intriguing tale of genetic engineering, including some very kinky elements as the story progresses. The morality of what Clive and Elsa have wrought becomes alarmingly apparent.

Generally, “Splice” is absorbing entertainment, though suspension of disbelief is, clearly, essential. But there are some head scratching changes in motivation particularly from Polley’s character who, after being the soul of maternal protectiveness, turns on Dren quite shockingly, a rather curious turnabout for her character.

Special effects are excellent, particularly the infant creature executed with some fascinating CGI effects. The maturing Dren is an effective combination of computer effects and live action.

Natali directs the murky tale with effective atmosphere. (It was produced by Guillermo del Toro and, in fact, parts of the movie recall some of the fanciful elements of “Pan’s Labyrinth.”)

As noted, Brody and Polley give totally committed, plausible performances, until the script throws them some curves late in the game, and the story veers off to its wild tangents.

(Rated R by the MPAA for disturbing elements including strong sexuality, nudity, sci-fi violence and language.) Print this post
Posted by Harry Forbes at 7:23 AM