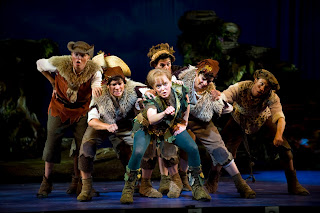 Playing a boy or not, Nancy Anderson is still pretty darned cute as J.M. Barrie’s most enduring creation. And she’s second to none, not even gymnast Cathy Rigby who has made such a specialty of Peter Pan, in terms of sheer athleticism.

Apart from the especially vigorous flying, Anderson performs multiple cartwheels and handstands. She leaps up and over the set with boundless ease, and dances up a storm. She whistles, plays the fife and kettle-drum. And she gets to sing in both her clarion belt voice, and classical soprano, all the while creating an artfully convincing lad with an impish sense of fun, a merry laugh, and a tomboyish bravado.

As astute musical lovers know, Anderson is one of those performers that, if she had been born in an earlier age, would be – like this musical version’s sublime creator, Mary Martin -- one of Broadway’s superstars by now, as her versatility knows no bounds, and she’s such an instantly appealing performer. So to see her take on one of the great lady roles from Broadway’s golden age is reason enough to high-tail it to Millburn, N.J.

The frenetic production around her, though, is something of a disappointment. More or less the Rigby production in terms of sets (John Iacovelli), costumes (Shigeru Yaji), and choreography (Patti Colombo), this mounting – directed by Paper Mill Artistic Director Mark Hoebee -- seems rather calculatedly short on heart and sentiment, presumably to ensure that the kids in the audience not be bored for a second.

The more poignant scenes are played much too fast. Even Peter entreating the audience to affirm their belief in fairies in order to revive the poisoned sprite Tinker Bell feels rushed.

The tuneful musical numbers (under Robert Meffe’s confident baton) – some by Mark Charlap (with lyrics by Carolyn Leigh), others by Jule Styne (and lyrics by Betty Comden and Adolph Green) -- are sometimes undercut by far too much physicality which leaves even the seemingly inexhaustible Anderson understandably breathless (though she uses all her considerable professionalism to disguise it).

The lovely Glory Crampton is a glamorous and empathetic Mrs. Darling. Douglas Sills’ Mr. Darling is fine, but oddly, he underplays Captain Hook, perhaps not wishing to copy the musical’s campy originator Cyril Ritchard. Still, he comes up with some choice line readings.

Jessica Lee Goldyn, last seen as Ivy in the Encores “On the Town,” makes a dynamic Tiger Lily, dancing superbly.

Columbo pulls out all the stops in the frenzied second act “Ugg-A-Wugg“ opener, a genuinely thrilling number, which after Anderson, is the most compelling reason to buy a ticket..

The production restores the Peter-Hook duet, “Oh, My Mysterious Lady,” cut from the Rigby version, since Anderson has the coloratura trills to do it justice.

The Darling children -- Hayley Podschun as Wendy, Jack Broderick as Michael, and Josh Pins as John – are adequate, as is John O’Creagh as Hook’s sidekick Smee

The production looks quite handsome, if occasionally spare, but the sound design lacked refinement and was occasionally distorted.