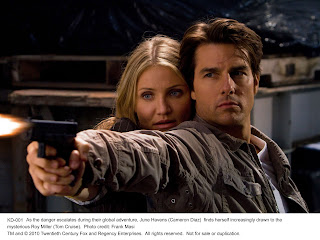 Tom Cruise is at his charismatic best in this engaging comic action lark.

He’s covert agent Roy Miller fighting off a succession of pursuers, including CIA agents and assorted bad guys, while he tries to protect a geeky scientist (Paul Dano) who’s come up with a bullet-sized energy source called the Zephyr.

Cameron Diaz plays June Havens, with whom he literally collides in the film’s opening scenes at a Wichita airport where she’s en route to pick up a carburetor. (Don’t ask.) On the plane, while June powders her nose, Roy dispatches all of the dozen or so nefarious passengers and the pilot, and lands the plane himself.

Though she screams a lot, June is, on the whole, remarkably nonplussed by all this. She’s now compromised by her association with him, her own life in danger, and the pair must elude peril at every turn, while June frets about attending her sister’s wedding back home.

Their adventures take them to Boston, Salzburg, Cadiz, and a tropical island. Roy and June get drugged and captured. There are car chases, an attack on a train by a professional assassin, a hair-raising motorcycle escape amidst the running of the bulls, and more

Is the enigmatic Roy good or bad? Crazy or sane? A rogue CIA agent? Is he falling for June or simply using her? Patrick O’Neill’s script keeps you guessing, but given the genre and Cruise’s charm factor – which, incidentally, is as much “acting” as Cary Grant’s effortless magnetism -- you never really seriously doubt his character’s good intentions.

Among their dogged stalkers are recent Tony Award-winner (for “Fences”) Viola Davis and Peter Sarsgaard playing the Feds, and, in the Spanish sequence, Jordi Mollá as a weapons kingpin.

The clinches between Cruise and Diaz are genuinely romantic, a rarity these days, and sex doesn’t enter into it. They have a good-natured rapport throughout. The violence is of the action variety, albeit with a high body count. The stars are both adept at balancing the comic and romantic elements, and both are up to the considerable physical demands of much of the stunt work.

There’s nothing profound here, and you’ll have to check your disbelief at the door, but as a fun summer movie, this tale of global espionage delivers the goods.

(Rated PG-13 by the MPAA for sequences of action violence throughout, and brief strong language.) Print this post
Posted by Harry Forbes at 8:26 AM