Get Him to the Greek (Universal Pictures) 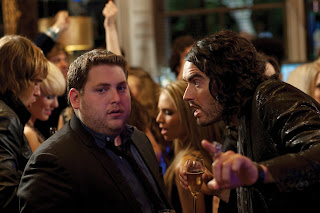 So Stoller has now taken Aldous and fashioned a new story, co-starring Hill, who here plays a completely different character. He’s Aaron Green, a nebbishy record company executive (Jonah Hill) sent to London to bring the dissolute star to perform an anniversary concert at Los Angeles’ Greek Theater. The results are sometimes tasteless, but on the whole, quite amusing.

Aldous’ career is particularly on the skids after the disaster of his appalling, politically incorrect if well-intentioned “African Child” music video, dubbed by nearly all as the worst thing to happen to race relations since apartheid.

Aaron is under strict orders from his boss, record honcho Sergio Roma (Sean Combs), to bring the drug-taking idol first to the “Today” show in New York (Meredith Vieira plays herself), then to the concert venue all within 72 hours, whatever it takes to do so.

Along the way, Aaron is forced to ingest large doses of drugs, act as a mule for Aldous’ heroin, get stabbed with an adrenaline needle, and become, shall we say, intimate with at least two uninhibited ladies.

As for that last indignity, Aaron believes he’s broken up with his sweet long-term girlfriend Daphne (Elizabeth Moss from “Mad Men), so sheepishly allows himself to go along with the first infidelity. (He and Daphne, a medical intern, had argued about moving from L.A. to Seattle for her to accept a position there.) But it seems Daphne only viewed their argument as a minor scrap, which throws Aaron into a guilty tailspin.

Along the way, of course, Aaron bonds with Aldous, whose romantic troubles -- pining for his ex-wife, model-singer Jackie Q. (Rose Byrne delivering a sharp performance), mother of his young son – parallel those of Aaron.

Stoller’s script spoofs celebrity, the pomposity and naive social consciousness of pop stars, the vapidity of the media, all the while humorously pitting the contradictions of an outlandish lifestyle against traditional values. For despite the sex, drugs, amoral behavior, and considerable gross-out humor, there’s a genuine humanity here, and at the end of it all, a pleasing moral center, as is true of all the Judd Apatow-produced films.

The film lags a bit during the Vegas sequence where Aldous meets up with his ne’er-do-well dad (Colm Meaney) who split from Aldous’ mom (Dinah Stabb) years earlier.

Brand and Hill are inspired comic actors, but also etch solid characterizations. Brand’s Aldous is narcissistic and wildly out of control, yet basically decent. Hill’s Aaron can be a push-over, but he projects strength of character. They work beautifully together.

In their inspired company, Combs – though he certainly throws himself wholeheartedly into the comedy – is over parted, as the street smart, industry-savvy, foul-mouthed exec who turns out to be a family man underneath it all.

(Rated R by the MPAA for strong sexual content and drug use throughout, and pervasive language.) Print this post
Posted by Harry Forbes at 8:07 AM