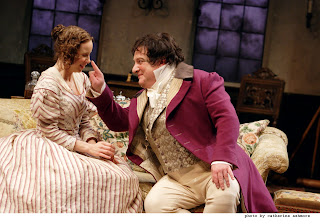 I had been curious about the series of NT Live presentations – satellite high definition feeds of plays from London’s National Theatre – but somehow missed the inaugural transmissions of “Phedre,” “The Habit of Art,” “Nation,” and “All’s Well That Ends Well.”

But I wasn’t going to let the acclaimed production of 19th century playwright Dion Boucicault’s “London Assurance,” pass by. Some may remember that the work – in a Royal Shakespeare Company production -- actually enjoyed a decent run at the Palace Theatre in the 1974/75 season with Donald Sinden, Roger Rees, and Elizabeth Spriggs.

On this occasion, Simon Russell Beale assumed Sinden’s role of Sir Harcourt Courtly, and gave a superb comic portrayal of a foppish gentleman with extravagant gestures and delicious double takes that gave new meaning to “over-the-top.”

Sir Harcourt is engaged to the (much younger) Grace (Michelle Terry), niece of his good friend, the good-natured Max (Mark Addy).

When Sir Harcourt comes to call on his intended at Max’s country house, he’s surprised to find his son Charles (Paul Ready), but through the contrivance of Charles’ inventive friend Richard Dazzle (Matt Cross), Sir Harcourt is convinced that the young man is merely a look-alike for his own son back home.

Of course, Charles falls in love with the spunky Grace himself, while Sir Harcourt takes a fancy to the cigar-chomping, hearty laughing, horsewoman Lady Gay Spanker, played with incomparable gusto by Fiona Shaw. She, in turn, has her hands full with her hilariously doddering old husband, played by Richard Briers with great panache.

Some sync problems aside, the technical quality was remarkably fine, with excellent camerawork, and enough audience shots before and after to give a satisfying you-are-there ambience.

The packed audience at BAM’s Rose Cinema laughed and applauded as if they were in the NT’s Olivier Theatre themselves.

The video began 15 minutes before official showtime with coverage of a juggling troupe just outside the South Bank theater. That grew a little tiresome. I think I’d have rather seen the actual theater crowd milling about in the lobby, but clearly this was just meant to be filler, and the BAM audience continued to converse during the juggling.

The troupe returned during the interval. And at the end of the performance, the cast came out to take their bows on the outdoor stage for the picnickers who had just watched the performance on an outdoor screen.

The production – superbly helmed by Hytner -- ended its London run on June 29, but it would be lovely if this broadcast – not to mention the others in the series – have an after-life, much as the Metropolitan Opera broadcasts do on PBS and DVD.