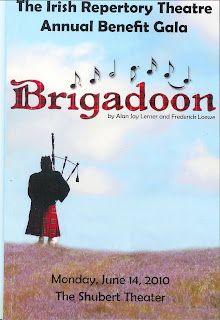 The Scottish setting may, in theory, have seemed a bit off the mark for the Irish Repertory Theatre, but not for long.

As the centerpiece of their annual gala, the enterprising company took over the Shubert Theatre for an abridged concert reading of Lerner & Loewe’s 1947 classic, set in a magical town of the Scottish Highlands. Cuts notwithstanding, they gave a most moving performance under the guidance of Artistic Director Charlotte Moore.

With any luck, this may foretell an actual mounting, much as the company's 2003 “Finian’s Rainbow” benefit gala presentation lead to a full production at their 22nd Street home the following year.

If that should happen, let’s hope they get Melissa Errico and Jason Danieley to reprise their roles as, respectively, Fiona and Tommy, the American wanderer who falls for her. They were just ideal, “The Heather on the Hill” and “Almost Like Bein’ in Love” sounding especially sublime.

There was a classy supporting cast including Christine Ebersole as man-hungry Meg Brockie, Len Cariou as old Lundie who tells Jeff and his companion Jeff (an amusingly sardonic Don Stephenson) the legend of Brigadoon and how it comes back for one day every 100 years.

A nice-sized orchestra conducted by Mark Hartman and chorus of 50 backed up the leads. A kilted Ciarán O’Reilly, the company’s producing director, provided the sensible narration from the sidelines. Matthew Broderick and Jonathan Cake engaged in some amusing Irish versus English banter as a curtain raiser.

In Moore’s adaptation (less than 90 minutes), Meg lost her companion comic number “The Love of My Life” and there was no “From This Day On,” but what remained was lovely.

Sebastian Barry’s “White Woman Street” is the company’s current production through June 27, after which, the late Frank McCourt’s amusing revue “The Irish…and how they got that way” opens on July 14. Print this post
Posted by Harry Forbes at 3:01 PM