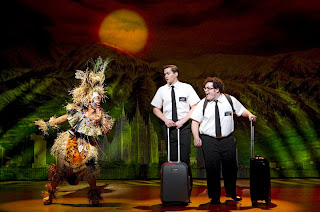 Well, now. On the one hand, “The Book of Mormon” is clever, delightful, tuneful, and exceedingly sweet natured, as it charts the amusing story of two Mormon missionaries – the clean-cut made-for-success Elder Price (Andrew Rannells) and the portly, friendless Elder Cunningham (Josh Gad) – sent to northern Uganda to do missionary work for their church. It’s your typical buddy-movie setup set to song.

On the other, as you might expect from book, music, and lyric writers Trey Parker and Matt Stone – the creators of “South Park” – working in tandem with “Avenue Q” co-creator Robert Lopez – much of the humor is puerile with plenty of envelope-pushing language, and there’s an overall tone for which the word irreverent is a whopping understatement.

The book is never mean-spirited, however, with barbs aimed mostly at the Mormon sacred text (e.g. Prophet Joseph Smith, his receiving of the gold plates, etc.), rather than the more likely-to-outrage-the-masses Old or New Testaments. The Mormon characters themselves are presented as likable (if repressed, as in the very funny “Turn it Off” led by Rory O’Malley with ingenious choreography by co-director with Parker/choreographer Casey Nicholaw).

At the start of the show, the Mormon boys are paired up in teams and assigned a two-year missionary location. The shallow Price wants nothing more than to be assigned to Orlando, Florida, where he once had a blissful childhood holiday, while Cunningham – once he learns that Uganda in is Africa – presumes the place will be just like “The Lion King.” (The Disney extravaganza is spoofed hilariously at least twice here.)

But no, they find themselves in a poverty stricken village (and kudos to Scott Pask for his wonderful sets throughout; ditto Ann Roth’s costumes) where the residents live in the grip of AIDS and in fear of a notorious genocidal war lord with an outrageously vulgar name. Rape and genital mutilation are the order of the day, not generally the stuff of comedy or musicals.

After being spattered with the blood of a man shot in cold blood, the cockily confident Price decides he wants out of the whole business. Once he bails, the inept Cunningham has greatness thrust on him when local girl Nabulungi (the marvelous Nikki M. James) insists he is their only hope to salvation and what she imagines is the wondrous “Salt Lake City.”

The show’s creators have managed some delicious parodies of iconic Broadway and Hollywood musical moments including a deft reworking of Maria’s “I Have Confidence” from “The Sound of Music” and most wickedly “The Small House of Uncle Thomas” ballet in “The King and I.” The songs – not listed in the program -- are fun, if occasionally blasphemous, and spiritedly performed.

The cast is excellent. Besides the aforementioned leads, there’s fine work from Lewis Cleale, Michael Potts, Brian Tyree Henry, and the others

Hard as it is to dislike the show, given the engaging performers, the cleverness of the material, and the light-hearted tone, the nagging question remains whether making mockery of anyone’s religion is fair game. Just asking. The New York Times recently reported that the outward Mormon position on the show is one of nonchalance, and that some Mormons who have seen the show have found it insightful despite the ridicule.

Ultimately, the script does makes a point about the religion serving a primal need for a belief system, even if the fantastical stories are, well, merely metaphors. And yet even if it’s all fraudulent, somehow we humans can go on, strengthened by that belief. It’s something akin to “Make Your Garden Grow” spirit of Candide and Cunegonde at the end of Bernstein’s operetta.