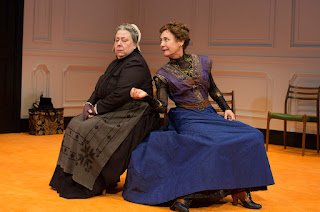 The intriguing sequel to Ibsen’s iconic work has Nora -- as fiercely played by Laurie Metcalf -- returning to husband Torvald’s home 15 years after famously walking out the door. Anne Marie (Jayne Houdyshell), the nanny to her children greets her, and in short order, Nora comes face-to-face with an embittered Torvald (Chris Cooper), and her grown daughter Emmy (a radiant Condola Rashad).


This is a tough, abrasive Nora as written by Lucas Hnath and as played by Metcalf, though she softens towards the end. Since leaving home, she’s written books, gone into business, had affairs. But she’s only just discovered that Torvald never actually divorced her. Under the law, all her property is technically his. And she could be brought to trial for signing contracts without her husband’s permission, and even go to jail.

Torvald, for his part, still mightily resents her walking out on him and their three children, and Nora’s unexpected return brings up mixed emotions. He’s not inclined to give her the divorce. But if she is the one who files, she will need to “ruin” him. Anne Marie, for her part, resents being put in the middle, as she is grateful to Torvald for supporting her and providing her livelihood for all these years, even if it meant having to ignore her own children.

When Nora finally meets Emmy to enlist the girl’s help in getting a divorce despite Torvald’s recalcitrance, the response is not what she expects as, surprisingly, she turns out not to be in sync with her mother’s feminist views.

Cooper, Houdyshell, and Rashad are all in top form.

Director Sam Gold’s modernistic spare production keeps the attention focused squarely on the characters and the words. Nora, at one point, breaks the fourth wall to address the audience on why she thinks marriage should be abolished.

Miriam Buether’s setting -- a large white room with a few chairs and some tellingly anachronistic props, like a box of tissues -- is positioned on a thrust stage, and starkly lit for Jennifer Tipton. An illuminated yellow sign proclaiming the play’s title in a distinctly modern wayhovers above before the play begins. And throughout the 90 intermission-less minutes, each scene is announced by one of the characters named projected large on the set walls. (Peter Nigrini is the projection designer.) But David Zinn’s costumes are, at least, traditional.

The play feels a bit didactic and sometimes superficial in its modern-day jokey tone, but the themes have resonance. Some of the lines are very funny. At one point, for instance, Torvald tells Nora, “Leave. There’s the door. I know you know how to use it.”

Hnath’s tone is comedic as much as serious, and the dialogue is decidedly contemporary and colloquial. “Just so ya know,” says Anne Marie at one point.  “F” and “S” bombs abound. It’s a bit off-putting, but the themes are a plausible outgrowth of Ibsen’s, and thought-provoking.

Photo: Jayne Houdyshell and Laurie Metcalf in a scene From “A Doll's House, Part 2” ©Brigitte Lacombe Print this post
Posted by Harry Forbes at 8:43 AM