Gently Down the Stream (The Public Theater) 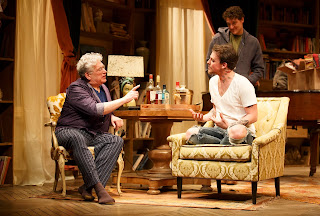 The latest play by Martin Sherman (author of “Bent”) concerns a New Orleans ex-pat named Beau (Harvey Fierstein), living in London and Rufus (Gabriel Ebert), the young man who comes into his life for a one night stand and stays. We learn Beau had been an accompanist for the great Mabel Mercer and was was a friend of James Baldwin, though he keeps most of his reminiscences guardedly under wraps.

Eventually, Rufus encourages him to record his stories, which allows Fierstein several touching monologues about gay life in an earlier era. The play derives its title from one of these, as Beau recalls a liberating bonding moment involving him and a couple of other gay men as they sang “Row, Row, Row Your Boat” in comforting harmony.

But overall, Beau’s life experience, which more or less mirrors the vicissitudes of the gay liberation era, has taught him that things always “end badly.” Concerned about aging, and so convinced Rufus will one day leave him, he pushes the reluctant young man to have other relationships, which (slight spoiler) Rufus eventually does, taking up with Harry (Christopher Sears), a tattooed performance artist seven years his junior.

The play is a bit slow in building steam, and the impossibly obstinate Fierstein character rather difficult to warm up to, but eventually you're won over.

Performances are fine with Fierstein’s trademark rasp mixing a New Orleans accent and Brooklynese. Ebert, a Tony winner for “Matilda - The Musical,”  is wonderfully appealing and believable as the manic-depressive lawyer Rufus, and Sears evokes a likeable persona and, at one point, impressively performs a song from his act.

Sean Mathias, who once directed a notable revival of Sherman’s “Bent” with Ian McKellan,  directs with a practiced hand for Sherman’s rhythms.

The play is somewhat predictable and didactic, and maybe a little too neatly wrapped up by the end, but at 100 intermission-less minutes holds your interest, and ultimately, proves affecting.

Photo: Harvey Fierstein, Christopher Sears, and Gabriel Ebert in Gently Down the Stream, written by Martin Sherman and directed by Sean Mathias, running at The Public Theater. Credit: Joan Marcus Print this post
Posted by Harry Forbes at 2:03 PM