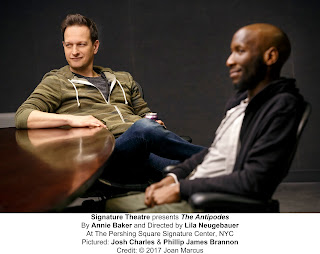 
Playwright Annie Baker’s latest play, after the excellent “John” (also at Signature), registers as amusing and thought-provoking, if a tad long. It concerns storytelling and the power of myth as a group of writers (Phillip James Brannon, Josh Charles, Josh Hamilton, Danny Mastrogiorgio, Danny McCarthy, Emily Cass McDonnell) gather around a conference table under the direction of Sandy (Will Patton) to brainstorm ideas which will lead to a TV mini-series event.


Sandy’s injunction is that, as they sit in this "cone of silence," they will start relating personal stories -- everything from first sexual encounters to worst experience to deep regret -- out of which will spring something new and fresh. “We can change the world,” he explains, “and we can make a shitload of money.”


The individual stories are a mixed bag but generally interesting, leading up to a lengthy Creation story related by the aptly named Adam (Brannon).


Sandy’s secretary Sarah (a very amusing Nicole Rodenburg) comes in periodically to take food orders, though eventually she, too, comes up with a story and it’s a doozy. A young man named Brian (Brian Miskell) takes notes on his laptop, and registers as a fairly passive character until late in the play (which runs one hour and 55 minutes without an intermission), he performs a strange ritual while all the others are sleeping.


At one point, they get a call from an important, but unidentified, person named Max (voice of Hugh Dancy) -- a sort of Big Brother -- and the crackling connection keeps failing. The tone of the play's narrative grows increasingly ominous and the writers tire of their seemingly fruitless exercise, as a major storm brews outside.


Boxes of LaCroix water stand at the ready at the back of Laura Jellinek’s simple set: a conference table with chairs, lighted by Tyler Micoleau. The conference table set up means that for about half the show, the actors on each side of the table aren’t fully visible to the audience members (half on each side of the table) behind it, which makes keeping track of who’s who slightly challenging.


Lila Neugebauer directs with sensitivity to Baker’s rhythms, and performances are all very fine, though the static nature of the setup brings occasional tedium, and I’m not sure what it all signified by the end of the evening. Still, for all that, I found it to be a generally worthwhile experience.