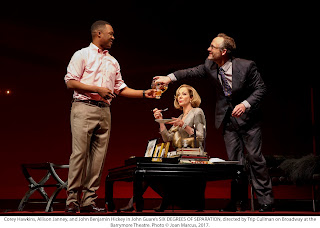 Here’s a superlative revival of John Guare’s 1990 play about an ambitious young man Paul (Corey Hawkins) who cons an art dealer Flan Kittredge (John Benjamin Hickey) and his wife Ouisa (Allison Janney glamorously bedecked in Clint Ramos’ upper crust duds) into believing he’s the son of actor Sidney Poitier and a friend of their own children.

He shows up at their Fifth Avenue apartment claiming to have been mugged, with a minor knife wound to prove it.

They soon learn that others have fallen prey to the same ruse: another affluent couple (Lisa Emery and Michael Countryman), a doctor (Ned Eisenberg), and most poignantly, an idealistic  pair of aspiring actors (Peter Mark Kendall and Sarah Mezzanotte).

He has given most of them the same line about his lineage, along with the improbable notion that his father is about to direct a movie version of “Cats” in which they’ll have roles. Much as Flan and Ouisa disdain “Cats,” it’s clear they’ll jump at the chance. The Andrew Lloyd Webber musical is but one of several New York cultural references of the era, including, for instance, another Lloyd Webber show “Starlight Express” and Earl Blackwell’s talent finder Celebrity Service.

For Flan and Ouisa, they get their rude awakening when a naked hustler (James Cusati-Moyer) ends up in Paul’s bed. Even though the upper crust characters are mortified at having fallen victim to the scam, in some ways, as Ouisa points out, the incident has validated their lives, particularly as their own children -- mostly all spoiled and self-centered -- stand in stark contrast to the earnest, well-spoken young man before them. There’s a beautifully written and orchestrated scene of the children of the duped adults berating their parents for their stupidity in a rising cacophony.

Guare based his play on the true story of one David Hampton. (I once knew one of the victims, and how I wish, all these years later, that I had probed for some details.)

The whole cast -- 18 in all -- is quite wonderful, with Janney, Hawkins and Hickey in top form.. It’s a luxury to enjoy such a well-populated play with some minor characters who have relatively little stage time.

Trip Cullman, recently on Broadway with his terrific “Significant Other,”  directs again with a sure hand. Stylishly designed by Mark Wendland, and lighted by Ben Stanton, the production (dominated by its deep red palette, with a two-sided Kandinsky painting hanging above) is a visual pleasure.

Guare’s barbs at the privileged class are right on target, the portrayal not without compassion, and the play holds up very well indeed. It matters very little that in today’s internet age, Paul’s scam would be quickly unmasked. The themes still resonate.